Life in the African bush is hard for prey animals and apex predators alike. Ungulates such as Zebras, Gazelles and Wildebeest are constantly wary, keeping watch to ensure they don’t fall victim as food for one of the countless predators that share their territory. Predators fight among themselves over that same region. Lions will battle to control existing prides and fight to drive off other predators, like Cheetahs. Very often with grim results for the victims.

During my 2017 trip to Ndutu we saw many Cheetah families living in the Makao plains. Among them were two bachelor brothers that we had hoped to encounter during our journeys. With a top speed approaching 70 miles per hour, Cheetahs are the fastest land animals in the world. They can maintain this speed for approximately 500 yards. As a singular animal a Cheetah is capable of chasing down and capturing smaller prey, a favorite being a Thomson’s Gazelle. Adult male cheetahs often form coalitions with siblings. As a team, they are capable of bringing down much larger prey, like Wildebeest. We wanted to see this two-male coalition in action.

On January 31, during our morning game drive we happened upon a lone Cheetah that had climbed onto a fallen tree. It started calling and before we identified the gender we suspected a female calling for her young. Looking more closely we realized it was a male and that it was injured. His mouth was wounded and elbows rubbed raw. This was one of the brothers. His sibling was gone. Our best guess was that the two Cheetahs had been victims of a Lion or hyena attack during the night. Either the second male had been killed or severely injured. Perhaps he had escaped and ran off to hide. 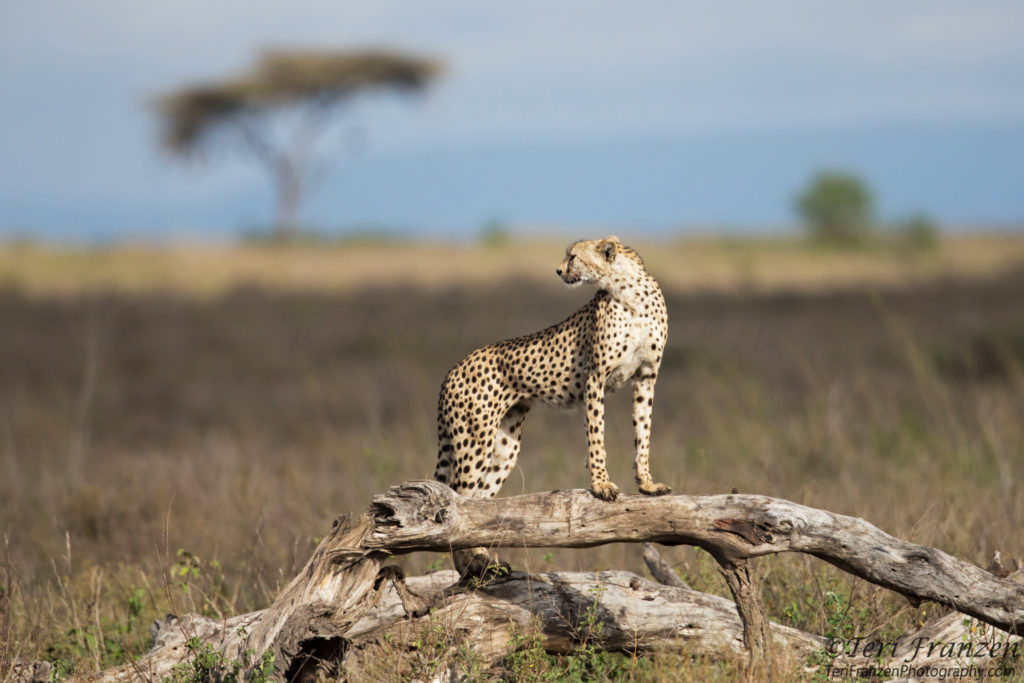 Injured Cheetah searching for his brother 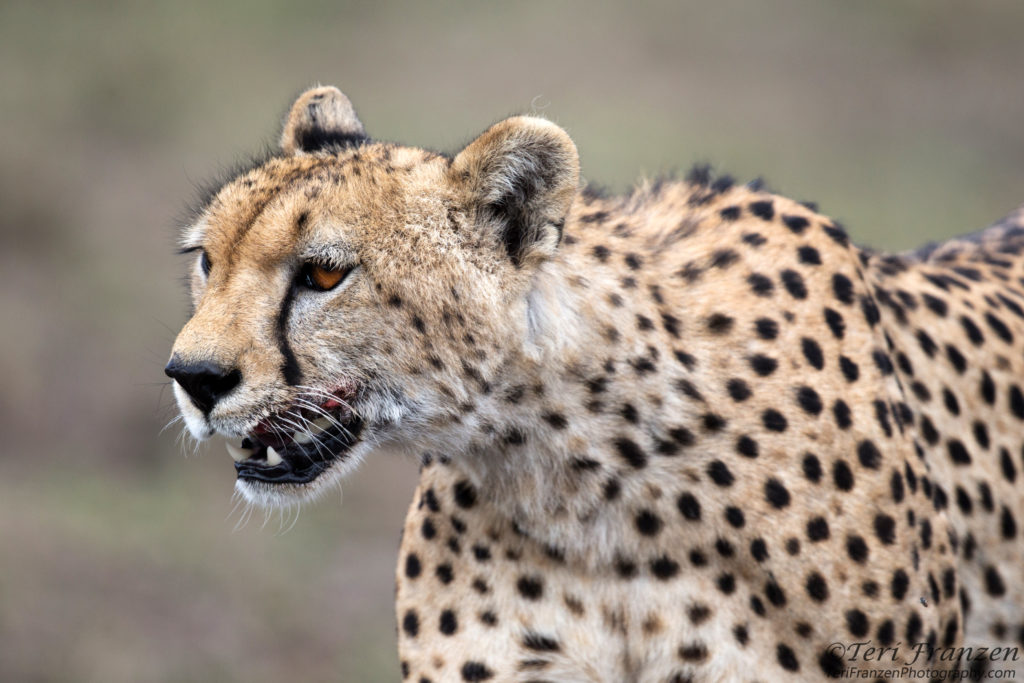 A closer look at his mouth injury

The wounded Cheetah wandered from tree to tree, sniffing for signs of his brother and then sending a stream of his own urine toward the tree. Like all cats, Cheetahs have a keen sense of smell and the uncanny ability to identify an individual by its unique scent. During this time he called continuously with a forlorn cry, presumably with the hope of vocally contacting his sibling. Occasionally he would leap onto a fallen tree to search and call from a higher vantage point. Viewing from a distance to avoid interference, we followed the lone male for over an hour. During that time his pace was constant, his conviction never faltered. 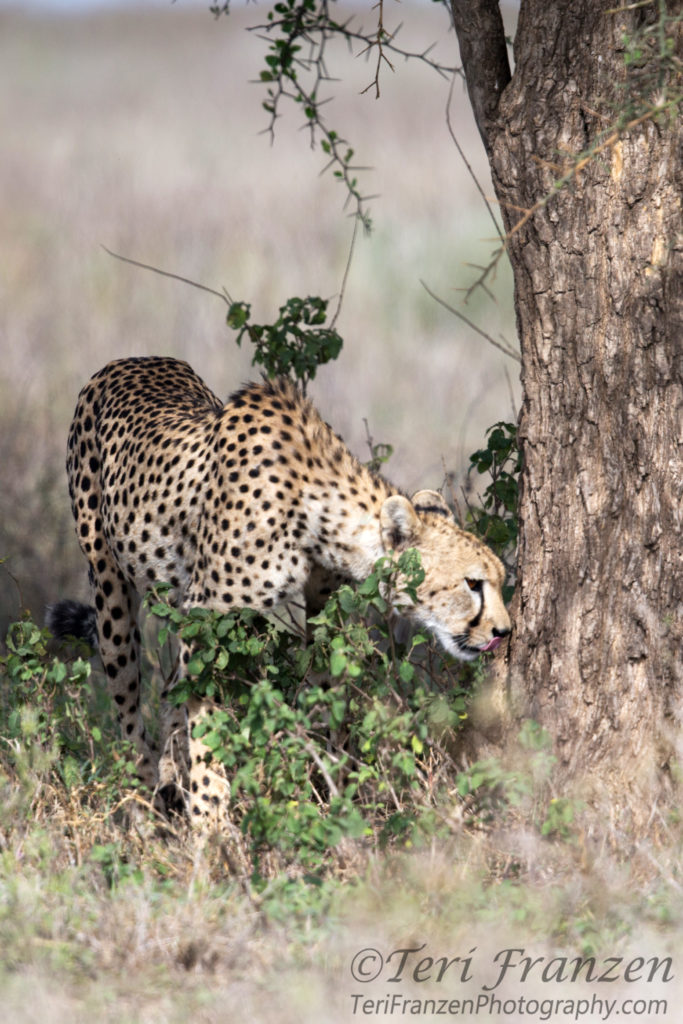 Sniffing a tree in search of his brother’s scent 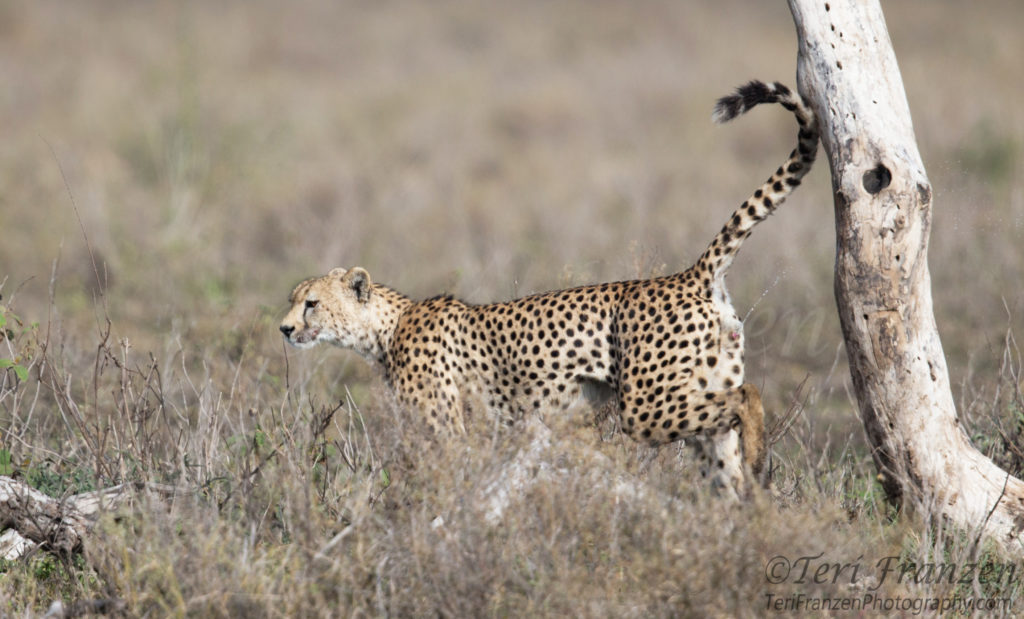 Leaving his own scent for his brother to find 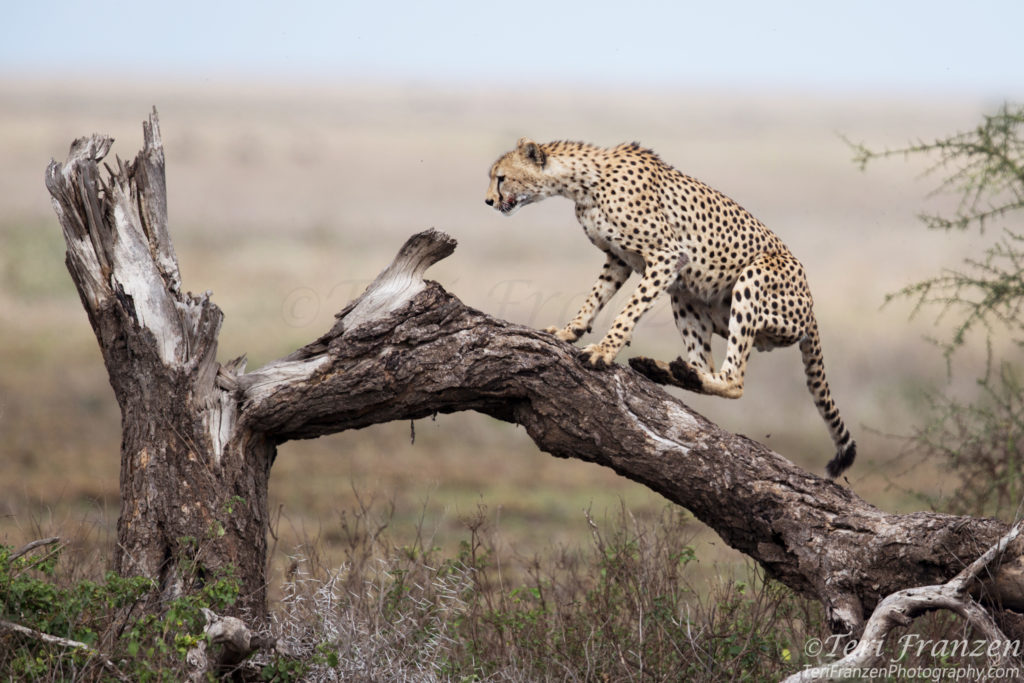 Hopping onto a tree for a higher vantage point. 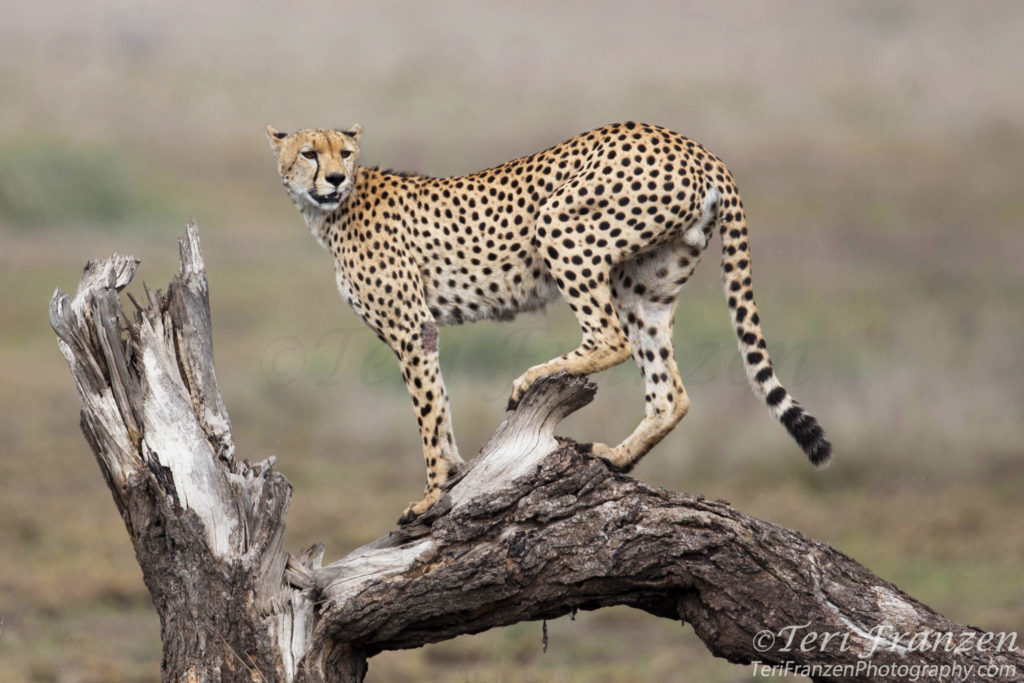 Calling and searching for his brother 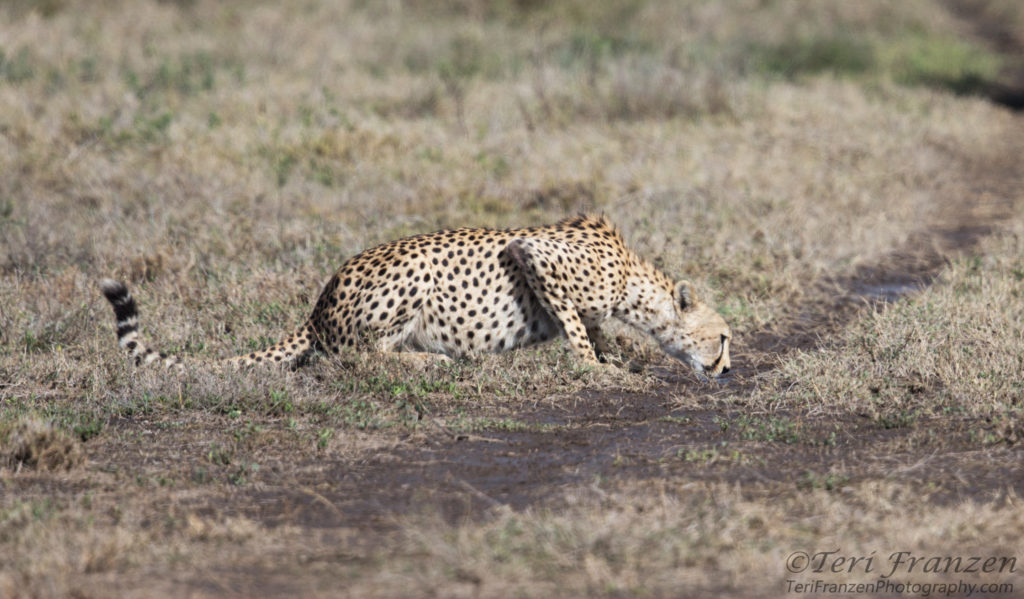 Growing parched from the heat and constant calling, he stopped to drink what little water he could find

Click play below for a short video of the lone Cheetah calling for his brother.  Viewing in HD is recommended.

The next day while driving through the plains we once again encountered this injured male. He was alone and still searching. He had not given up hope but mine started to weaken. I began bracing myself for the inevitable. I thought certain that this Cheetah would no longer have a hunting partner. He would be alone in the wilds of Ndutu. 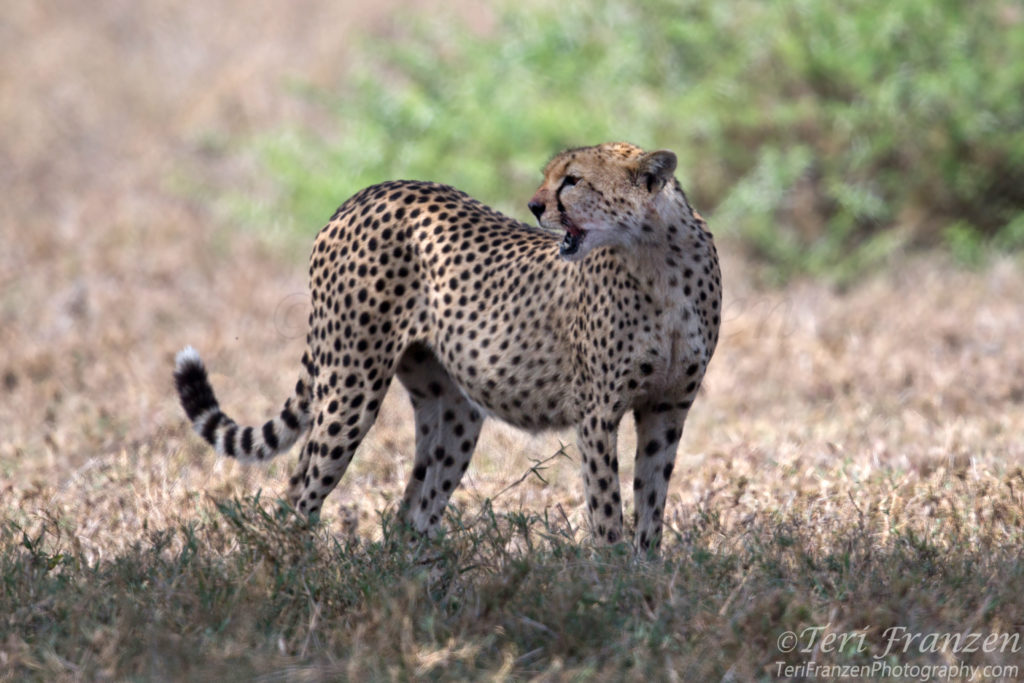 But sometimes in the African bush country, stories of tragedy also end in triumph. Later that evening, one of the photographers from our group excitedly reported that the brothers had been reunited! While out in the plains during the evening drive they had found both brothers together. The one that had been missing was limping badly and they were concerned about his ability to hunt. Relying heavily on its top speed of pursuit, a Cheetah with even a small injury can fall to starvation. For now the two were together and resting from their ordeal. We high-fived and toasted while shedding tears of joy and relief. A few of us vowed to seek them out the next day.

The following morning we set out on our drive with the hopes of finding the brothers. Luck was on our side and we came upon the two boys fairly early and just as they had begun to hunt. Remarkably, both looked strong and agile. Almost immediately the two Cheetahs burst forth at top speed toward a group of Zebras and Wildebeest. 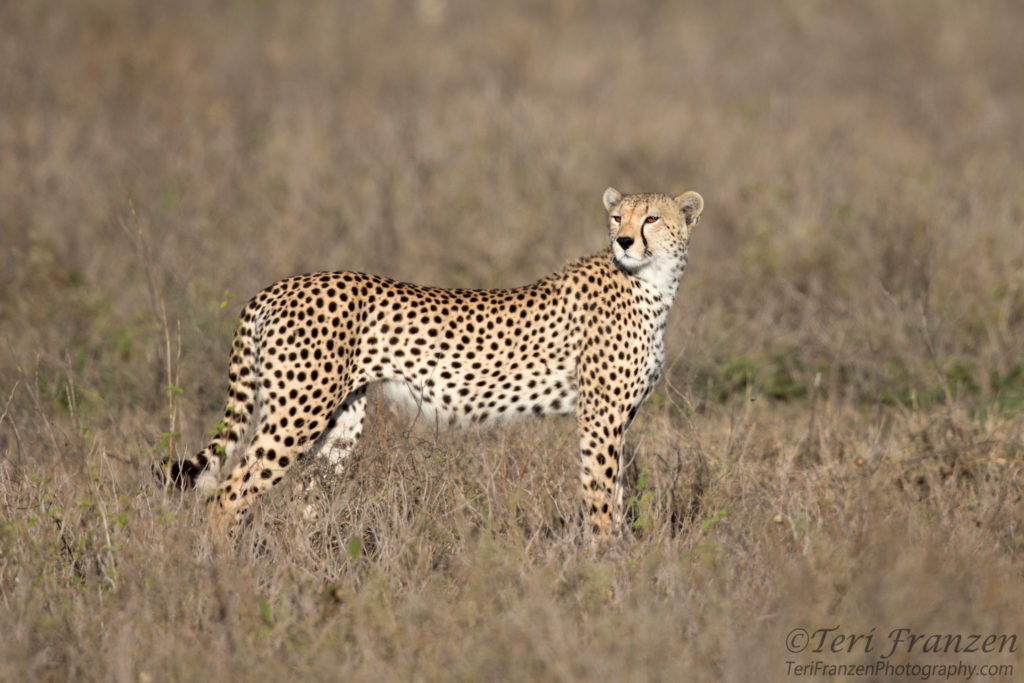 The brother that had been missing, looking strong. 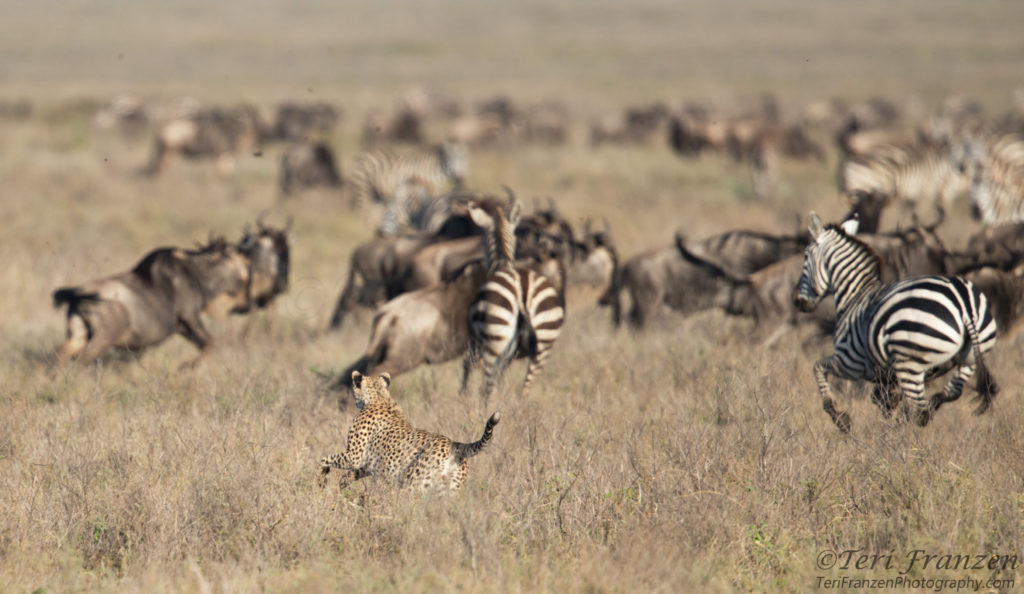 One of the boys chasing down a Wildebeest

As we drove to get closer to the scene the Cheetahs launched at a lone Wildebeest, making quick work of bringing it down. Cheetahs only eat fresh meat and will eat immediately after the kill. Once they are satisfied they leave the remains for scavengers and never return to the kill site. We watched for a long time while the two brothers filled up on the Wildebeest. 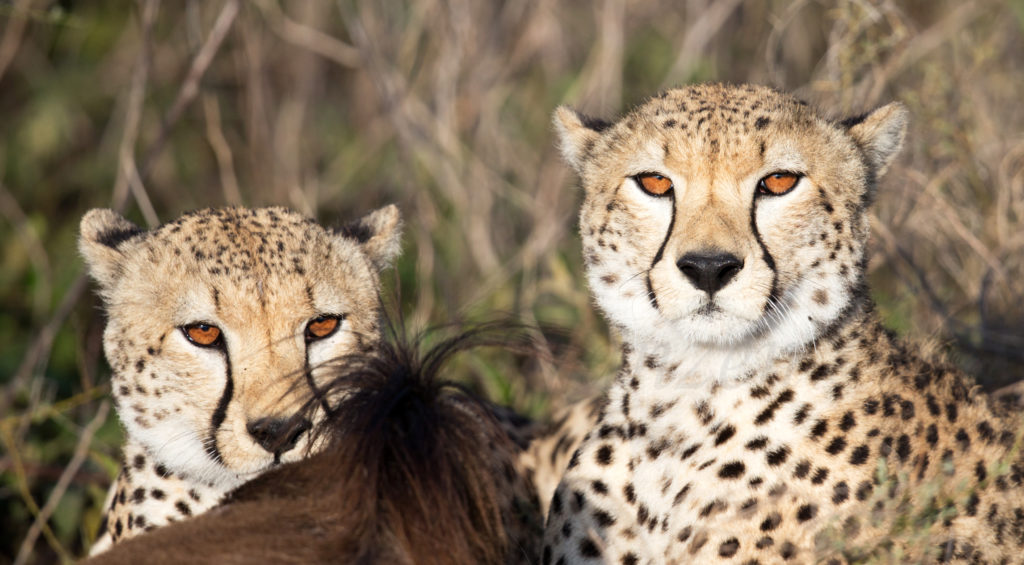 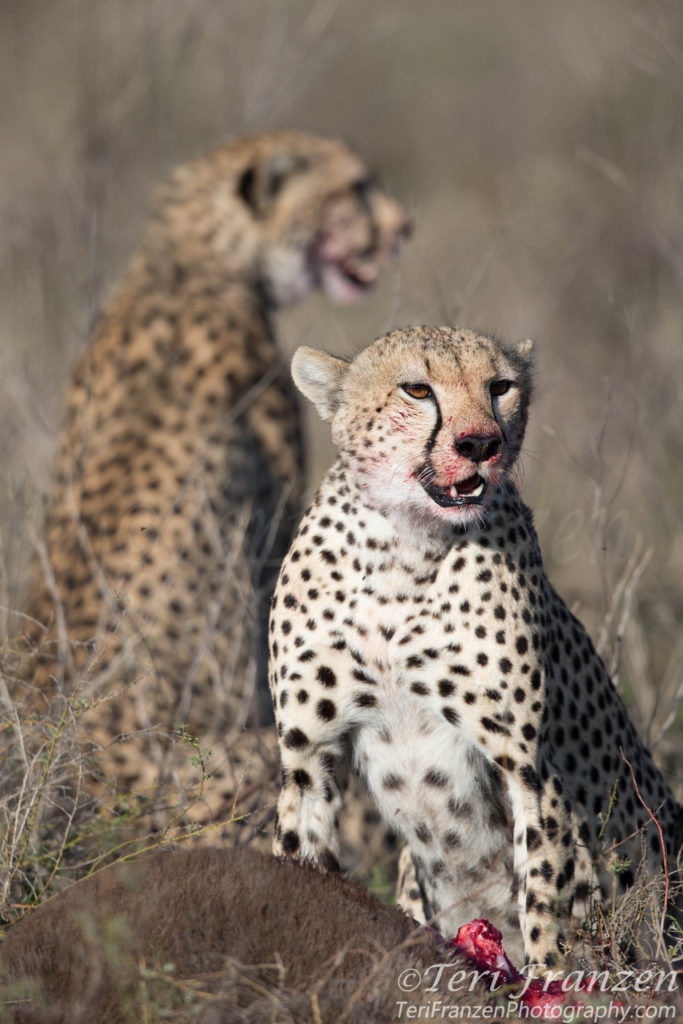 Once finished eating, we expected these boys to find the nearest shade tree and clean each other’s faces. They don’t want the scent of blood to attract predators or scavengers. Hoping to witness this behavior we waited until the Cheetahs were finished. As soon as they were done they located the nearest tree and began to walk in that direction under the watchful eyes of a group of Wildebeest. 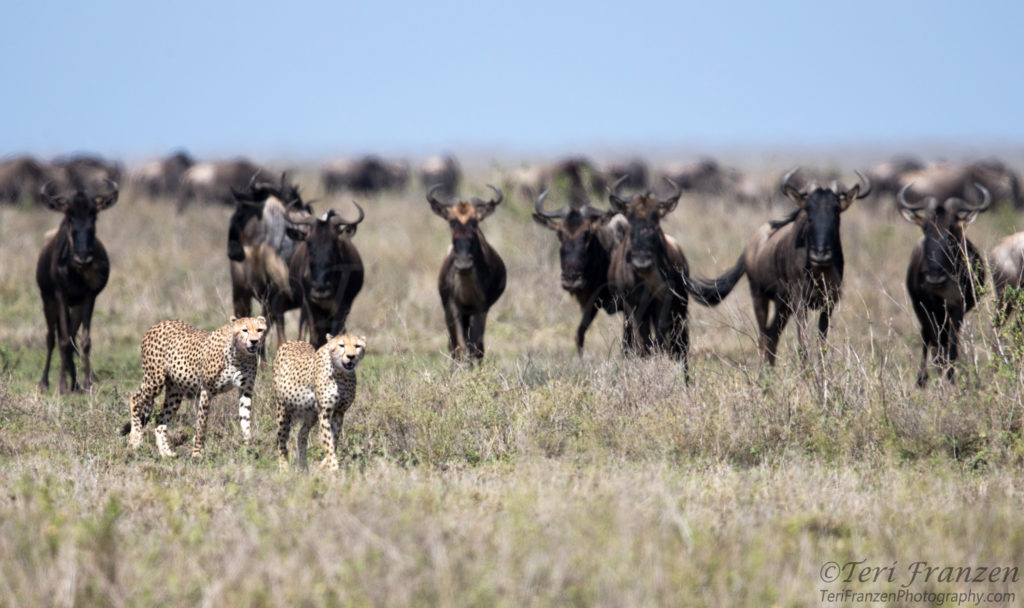 With their bellies full, the Cheetah brothers head toward a nearby tree while being watched by a wary group of Wildebeest.

Upon arrival, rather than resting, the two Cheetahs became unsettled. They immediately began sniffing the tree. Both boys appeared to be very interested in one spot and sniffed for a long time. It seemed there was no time for face cleaning. Instead they began walking away from the tree and calling. They had sensed a female in heat. The next chapter of their saga was about to begin. 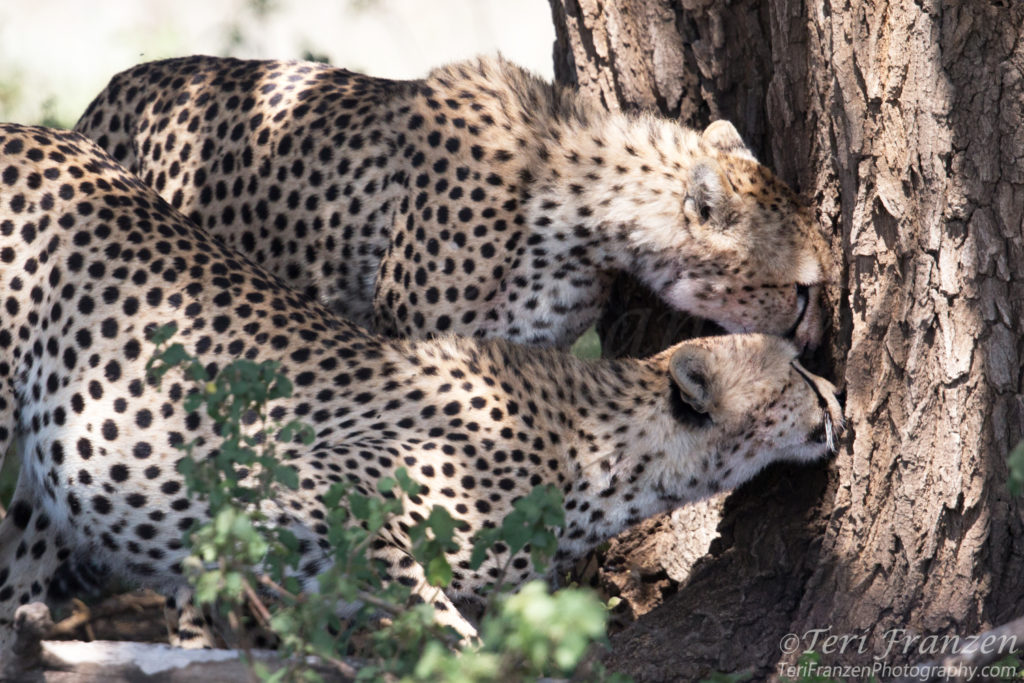 Sniffing the tree to discover a female in heat 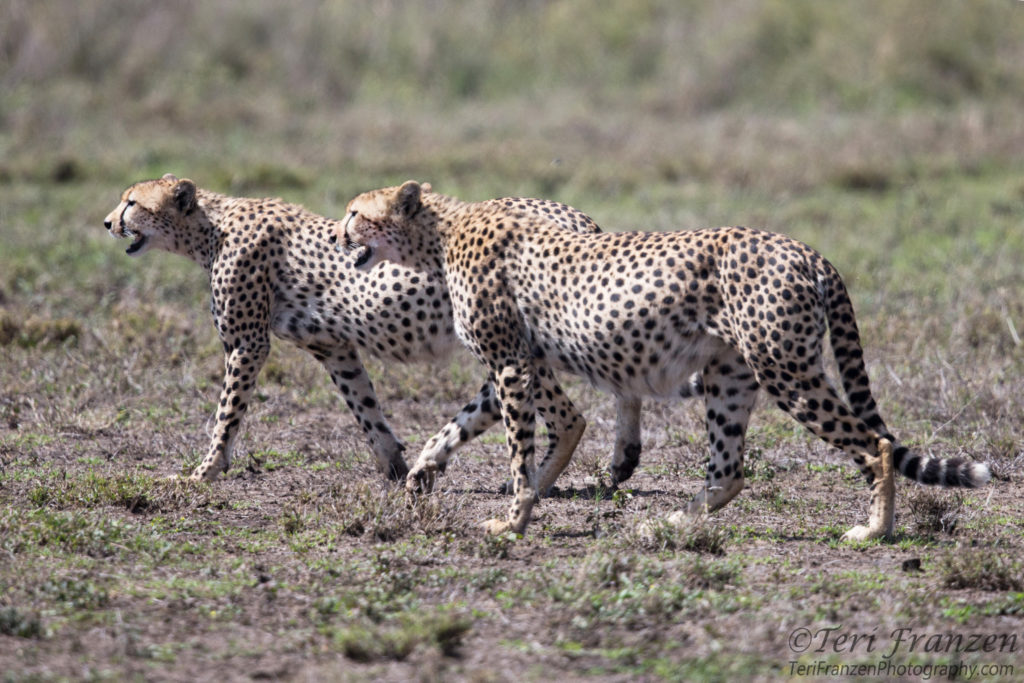 The following morning we encountered one of the Cheetah brothers one last time. He was lying near a fallen tree with a female. A male will lay with a female for two days during mating. He must wait for her to begin estrus before they can mate. Once mating is finished he will often stay until her cycle is finished to ensure no other males mate with her. In a few weeks’ time there would be new Cheetahs entering the Makao Plains. This Cheetah brother’s legacy would live on. 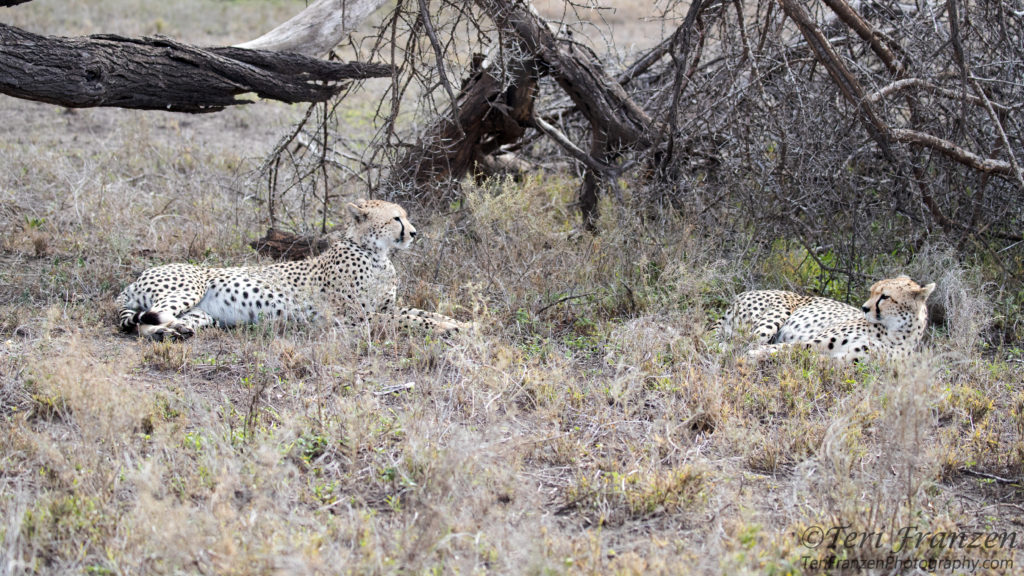 Cheetah brother (left) laying with a female in advance of mating.

Life in the African bush is hard for prey animals and apex predators alike. Some stories end in triumph but most often they end in tragedy. I’m happy that in this tale the two Cheetah brothers of Ndutu were able to buck the odds.

A Note on Cheetah Conservation:  The Cheetah population is currently listed by the IUCN as Vulnerable.  They are at risk of becoming endangered.  Since the early 1900s their species has been significantly reduced, more than 75%, due to habitat loss. Farmers have also been known to kill them as pests and in the mid-20th century they were hunted for fur. Cheetah cubs have a very low survival rate, primarily due to predation.  If you would like to learn more or donate to support the cheetah fund please follow this link for more details:  http://cheetah.org/you-can-help/

Click here for more images from my 2017 trip to Tanzania.

4 thoughts on “A Tale of Two Brothers”