My boyfriend, John, and I have spent countless hours searching for bighorn sheep, scouring rocky mountain surfaces for the large white patches adorning their rear ends.  As rams mature, they grow large, spiral horns which reach a weight of 30 pounds.  We wanted to see the intriguing ungulates that sported such impressive headgear.

During our first ill-fated trip to Yellowstone, which coincided with the 2013 government shutdown, we visited Whiskey Basin Wildlife Management Area in Dubois, Wyoming. At that spot, four weeks earlier, one of John’s artist friends painted a small group of mature rams as they posed beautifully amid high desert foliage.  The scenery was striking and our time was not wasted, but we only saw fresh droppings.  No sheep.  One year later, finally with the chance to explore Yellowstone, we had no luck.  That year we also returned to Dubois and encountered a group of ewes and lambs. No rams. In 2015 in north Yellowstone we found one lone, very young ram.  Weeks later herds of them would descend the mountains during the winter months, seeking out fresh vegetation.  We were always too early. 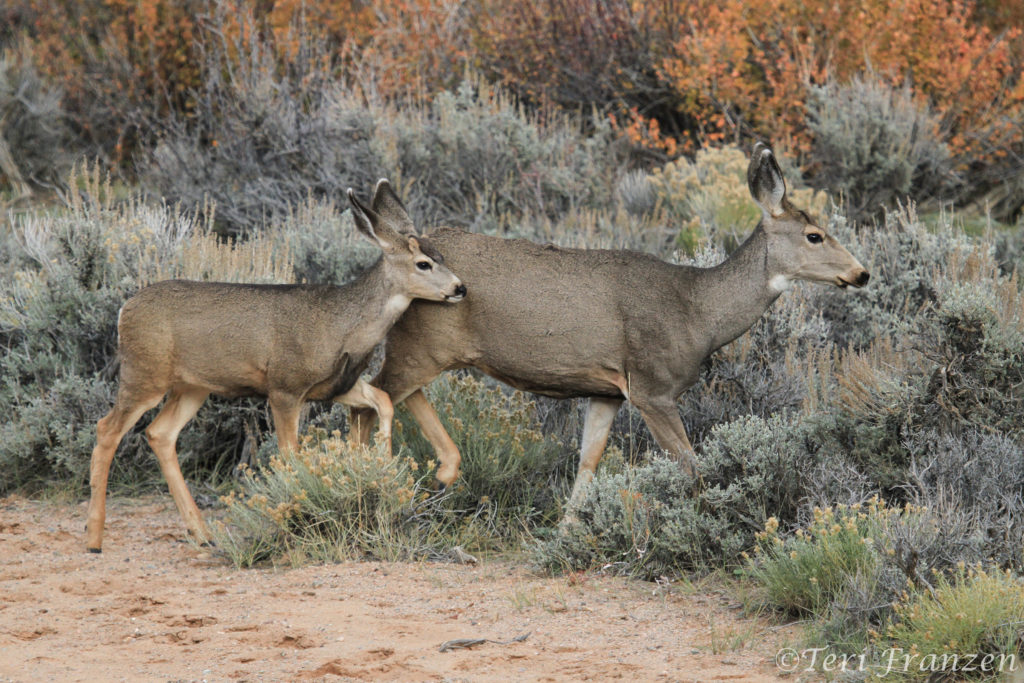 Muel deer doe and fawn at Whiskey Basin WMA in 2013

In February 2019 I attended the North American Nature Photography Association (NANPA) Summit in Las Vegas, Nevada.  Before its official start, John and I spent a day in Hemenway Park, a place known for its resident bighorn sheep.  Research yielded hundreds of photos of the park, all showing sheep grazing, many next to swingsets and tennis courts.  We longed for a more natural setting, but were sure we’d find them.  During our day at Hemenway we waited and hiked for hours but only found fresh pellets in the grass.  The surrounding mountainous terrain was lovely with its view overlooking Lake Mead.  No sheep. 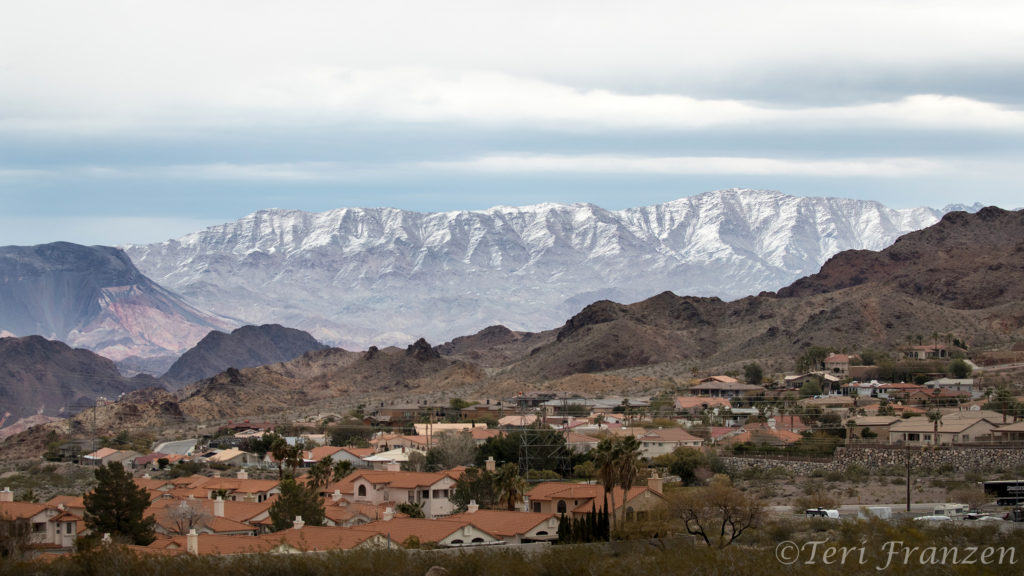 On to Las Vegas.  Day two of the summit, during an editorial review with George and Kathryn Lepp I randomly mentioned our quest for the mature bighorn ram. George said “Valley of Fire State Park, they’re all over the place!”  This park is only an hour from Las Vegas.  We made a plan.

Following the seminar, John and I checked out of our hotel, left the city and drove further into the desert.  The scenery in Valley of Fire was spectacular, a perfect setting for these elusive ungulates.  Driving toward Arch Rock we saw cars parked alongside the road.  On our left, we spotted them, a large group of rams of mixed ages, including a few elders.

That afternoon and throughout the next day we observed and photographed the interactions between these desert bighorn rams. At last, after years of searching, our dream had been realized in a spectacular setting.  Thank you George and Kathryn Lepp and the NANPA Summit!

Valley of Fire State Park, panoramic stitch of five images. Photographed from high up a grass and rock surfaced hillside.

The Bighorn Ram is a male of a species of sheep specific to North America. Split into three sub-species, Rocky Mountain bighorns, Sierra Nevada bighorns and Desert Bighorn sheep, they are primarily found in distinctly different ecosystems, however, there is some crossover.

Like most ungulates, bighorn sheep spend the majority of their days among gender-specific groups. There is a hierarchy of males in which he who has the largest horns reigns supreme. Age and maturity dictates the size of the horns. Therefore, it is commonly the oldest males that mate while the youngsters wait in the wings.  In the testosterone-laden bachelor group there is a lot of posturing and conflict.  Battling peaks during rutting, or mating, season but is evident throughout the year. 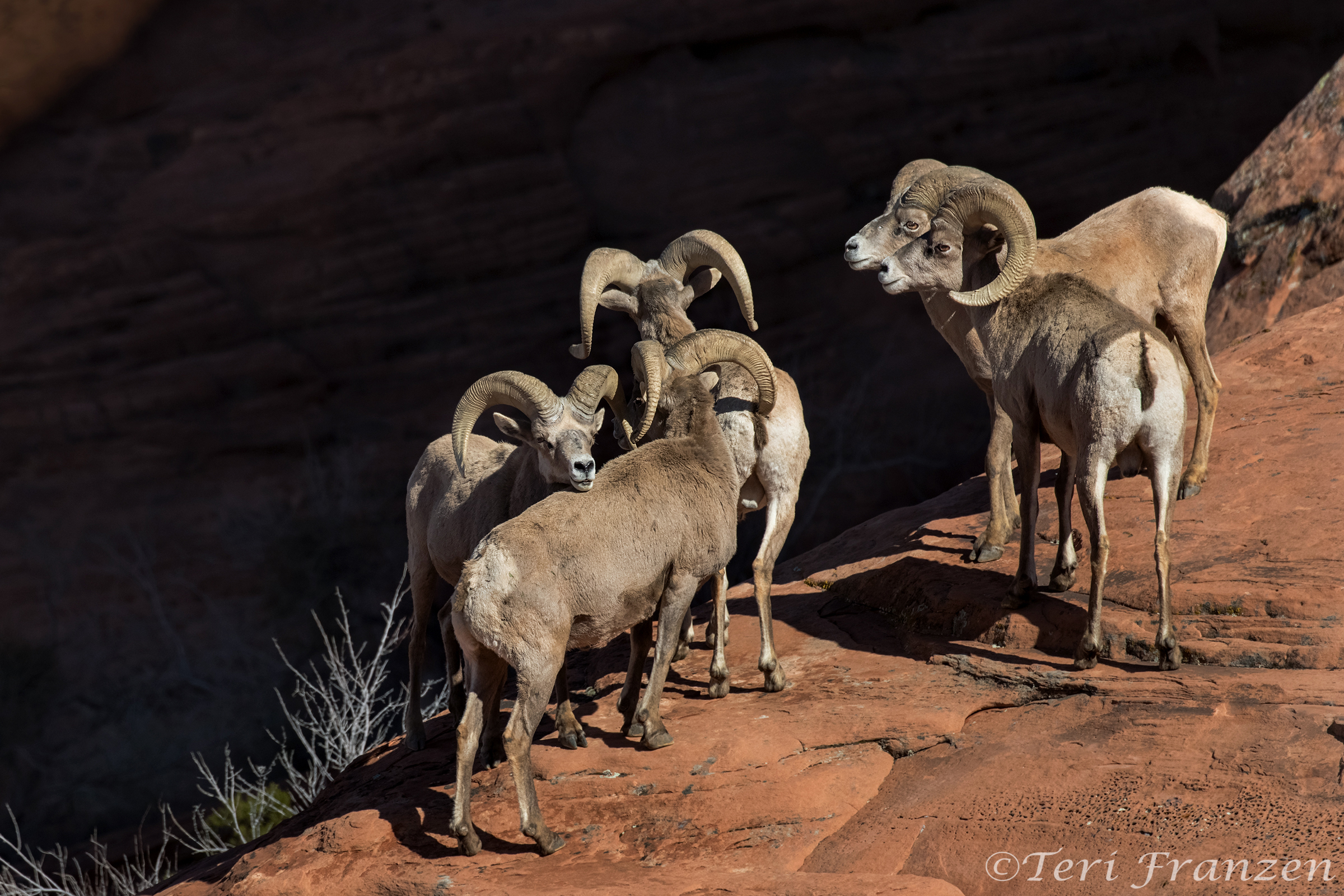 The left, rear ram has asserted his dominance by placing his chin on the less mature male. 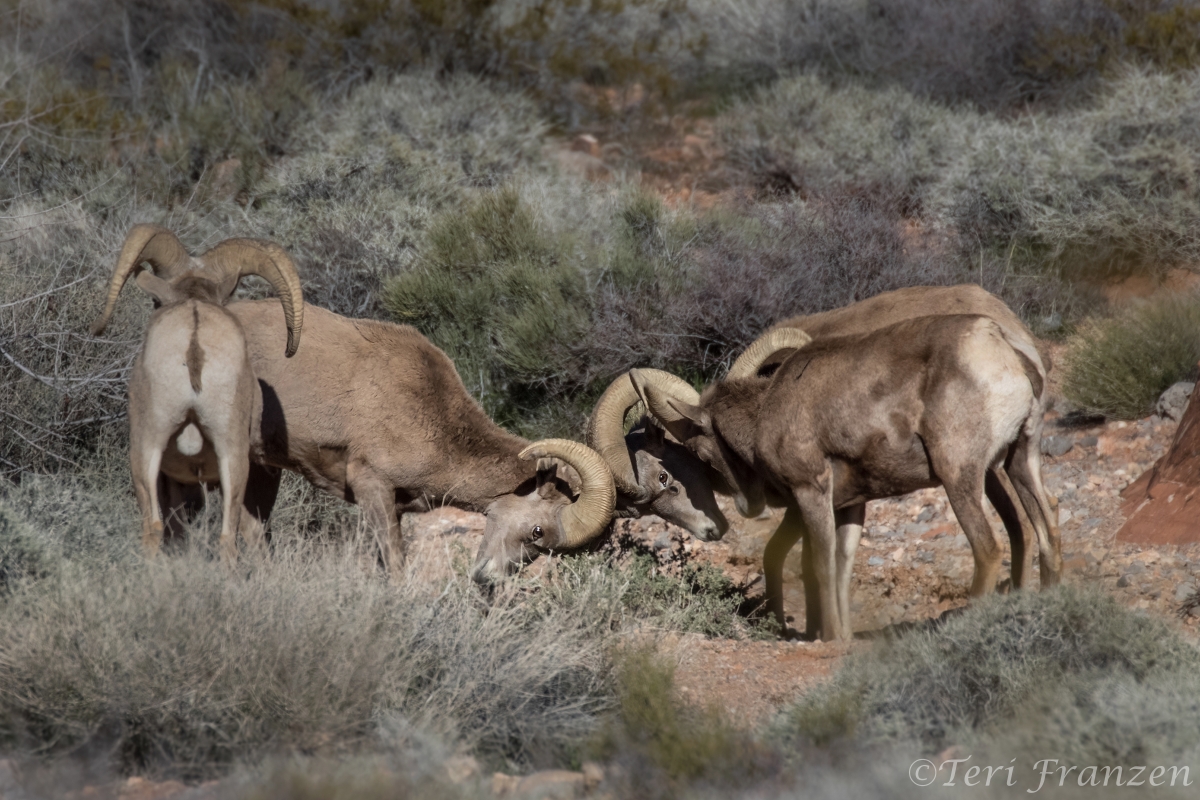 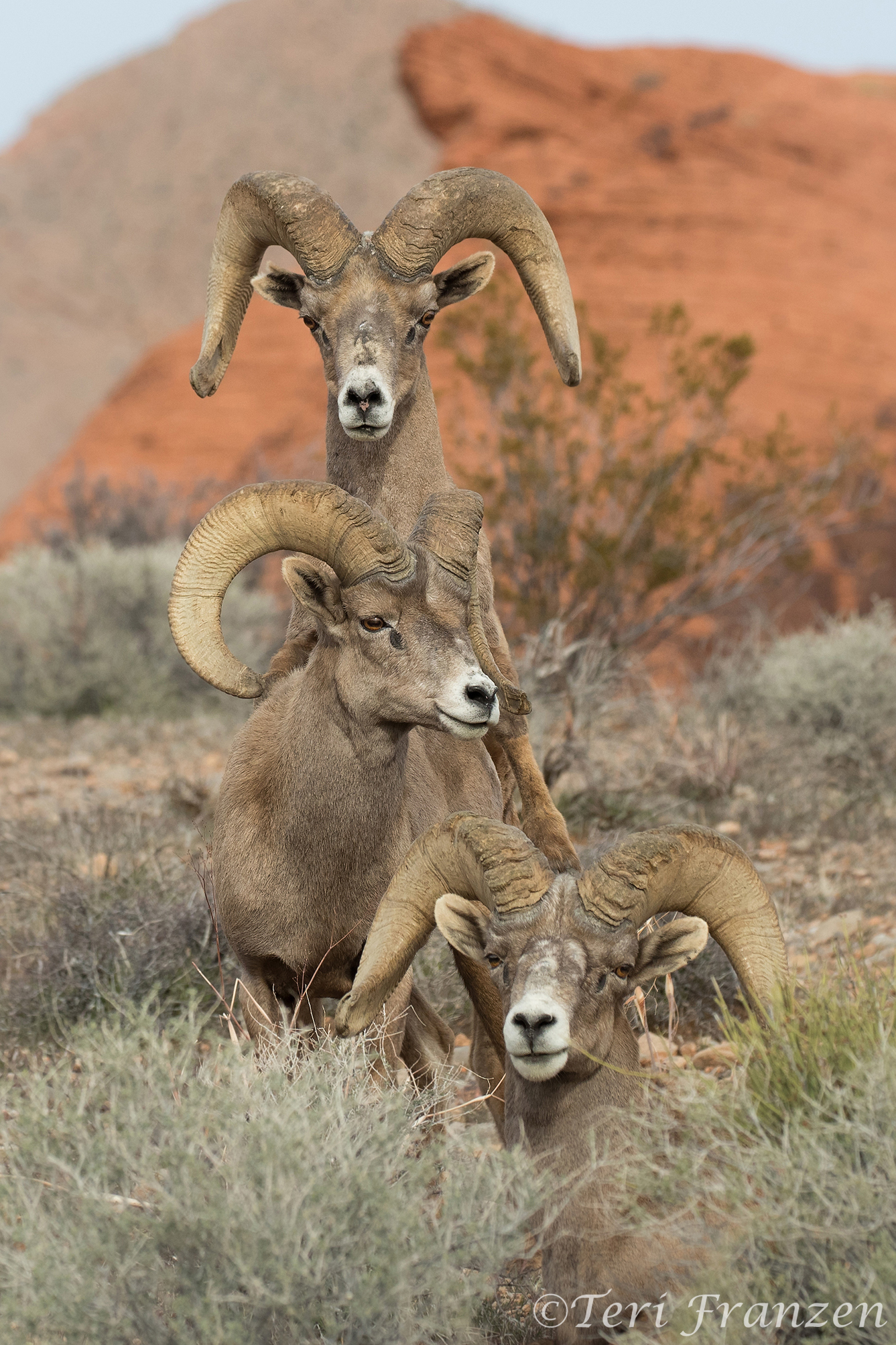 Stacking Up: Another combat strategy is rearing up on a subordinate male.

Sheep are herbivores, preferring grassy mountain slopes and alpine meadows.  Grazing on grasses and browsing on shrubs, these ungulates receive hydration from moisture in fresh vegetation.  Sheep have ruminant, or four-chambered, stomachs allowing them to quickly eat large amounts of vegetation.  They then retreat to a safe location where they regurgitate and continue chewing the contents of their stomachs.

Sheep pupils are rectantuarly shaped. With eyes placed wide on their heads, they are provided an expansive view of the horizon.  Cyclovergence allows pupil rotation while the sheep lower their heads to graze, allowing these prey animals to watch for threats. 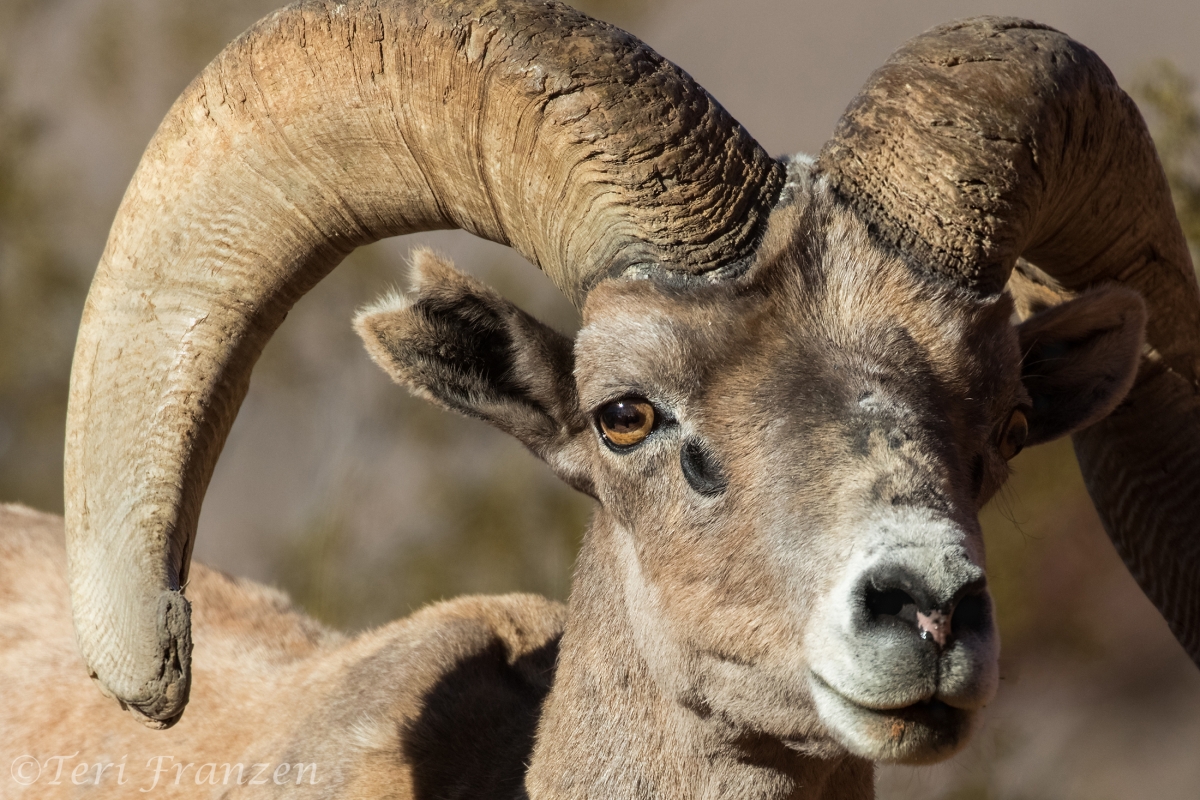 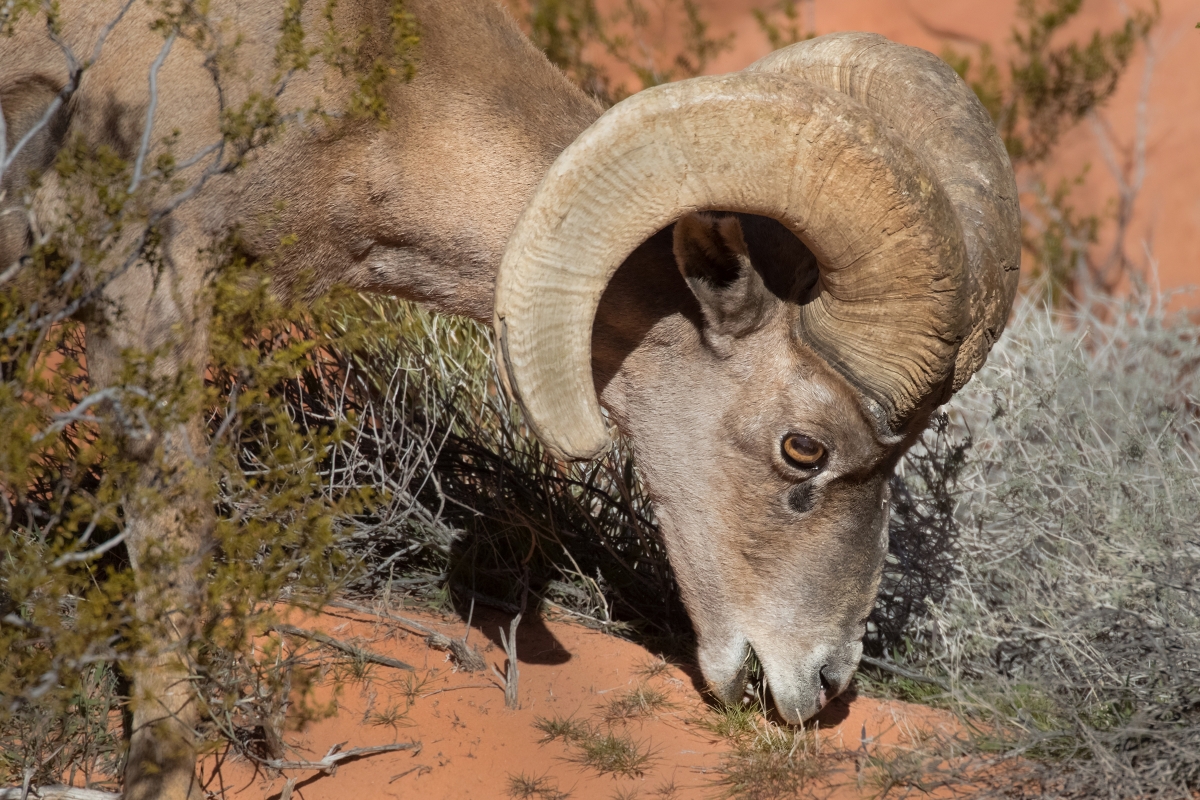 The elongated pupils of sheep rotate to provide optimal vision even with the horizon while their heads are lowered to graze. 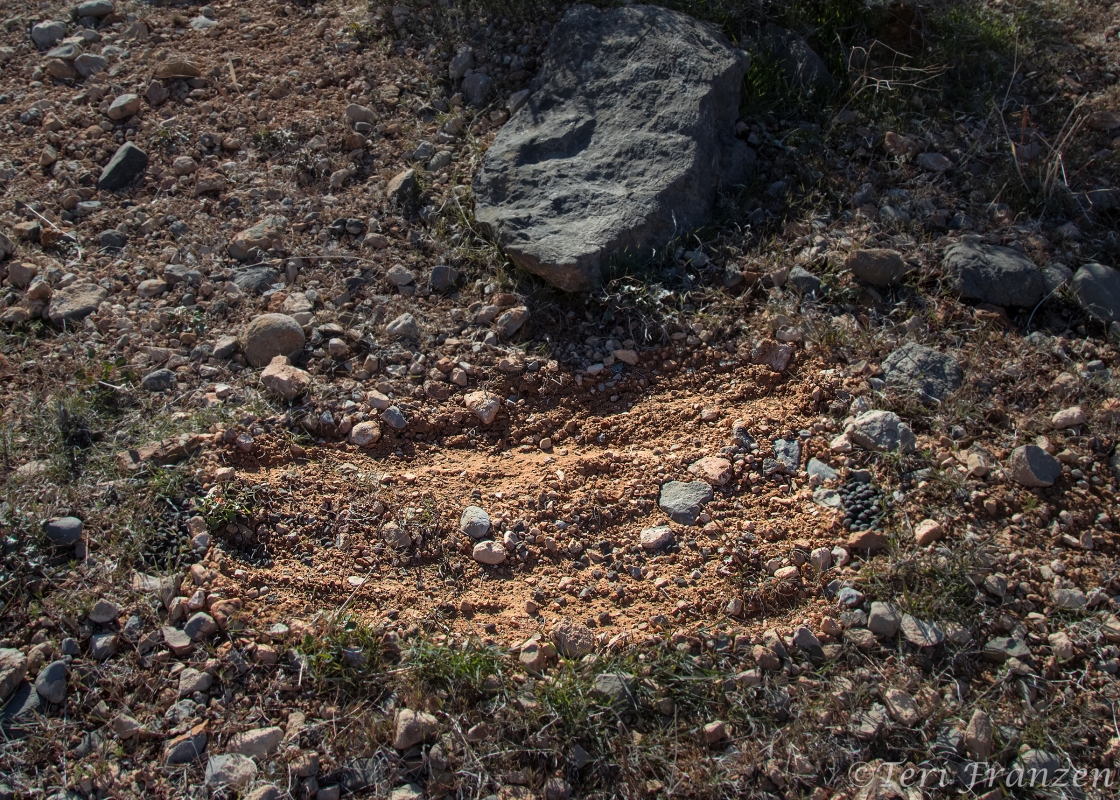 Before settling onto the ground to rest or ruminate, sheep will dig at the earth to push aside large or sharp rocks.

While bighorn rams spend most of their days with other males, the ewes and lambs stick together in groups of their own. 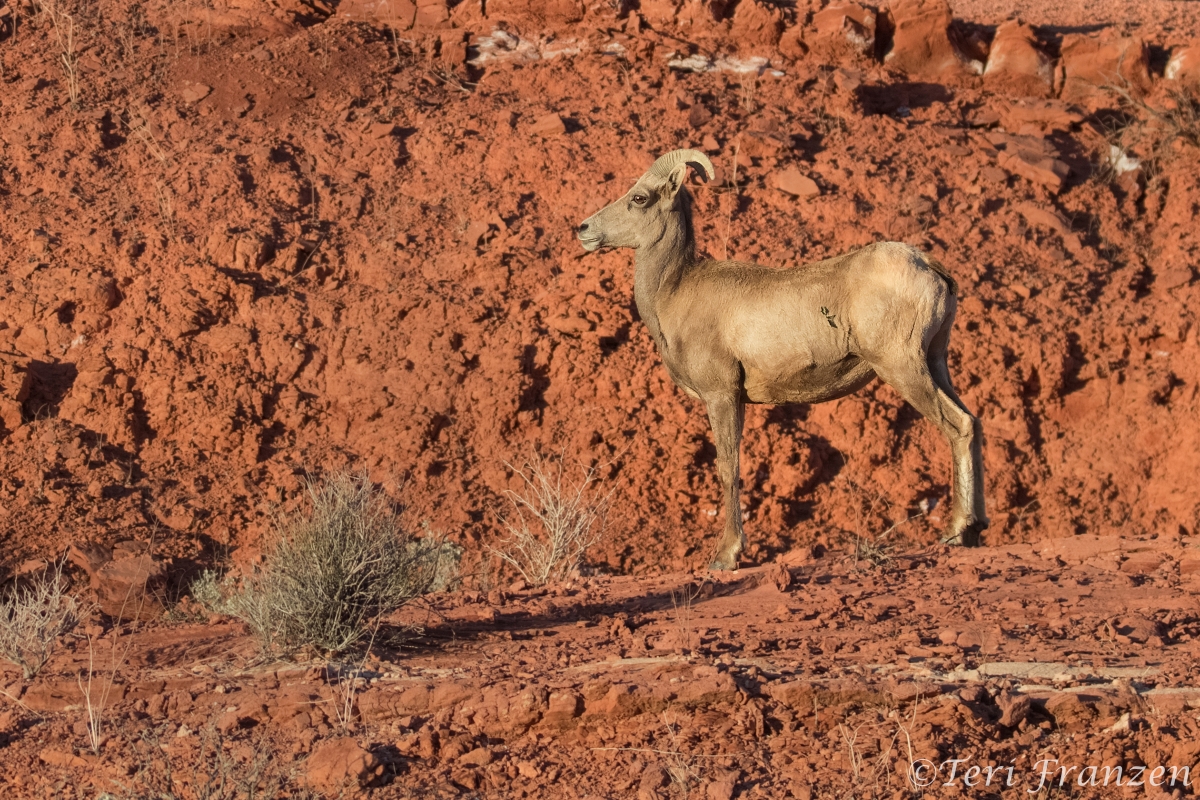 With their small, cloven hooves, sheep are sure-footed and able to scale steep surfaces. 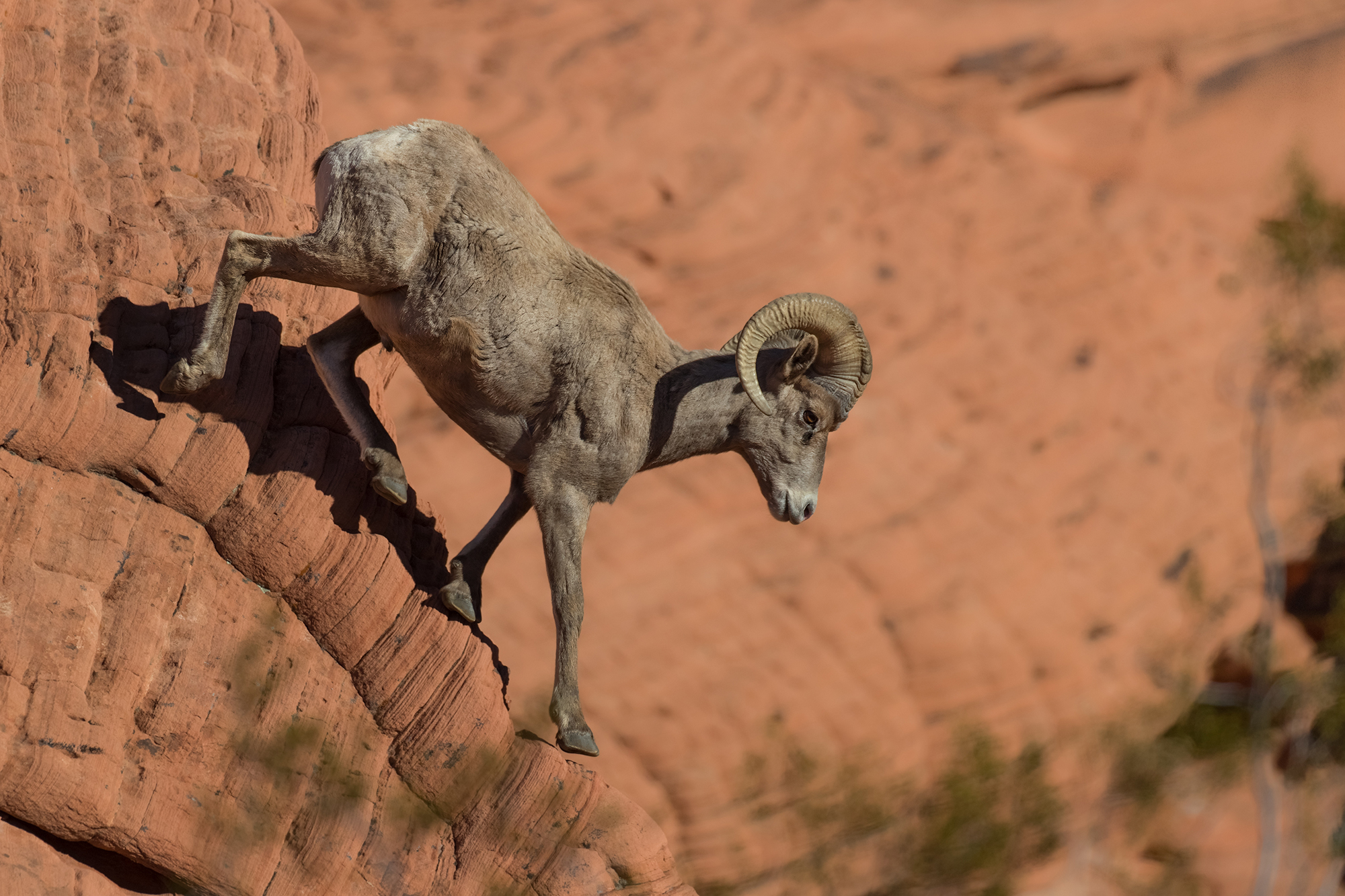 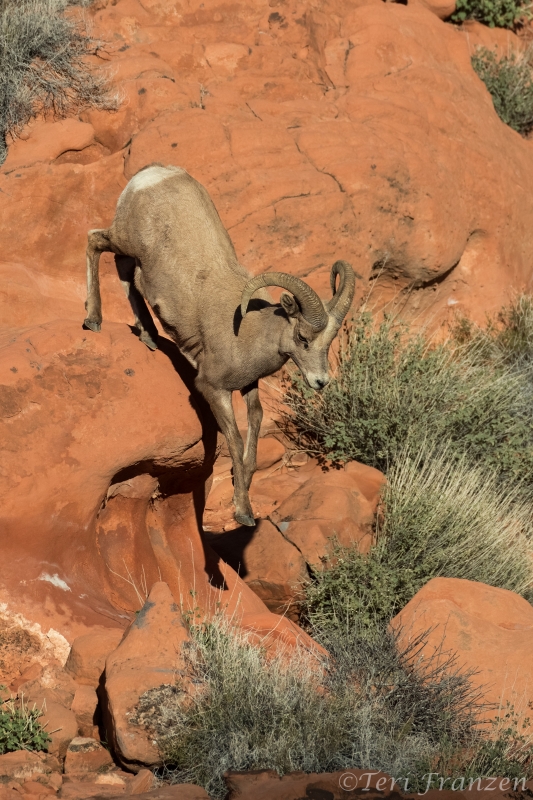 Young ram leaping down from the rocks.

Spend five minutes in Valley of Fire state park and you will be treated to a variety of wildlife.  Listen carefully to hear the call of a common raven in the distance.  And be sure to watch the sandstone surfaces and holes in the porous rocks for small land creatures. 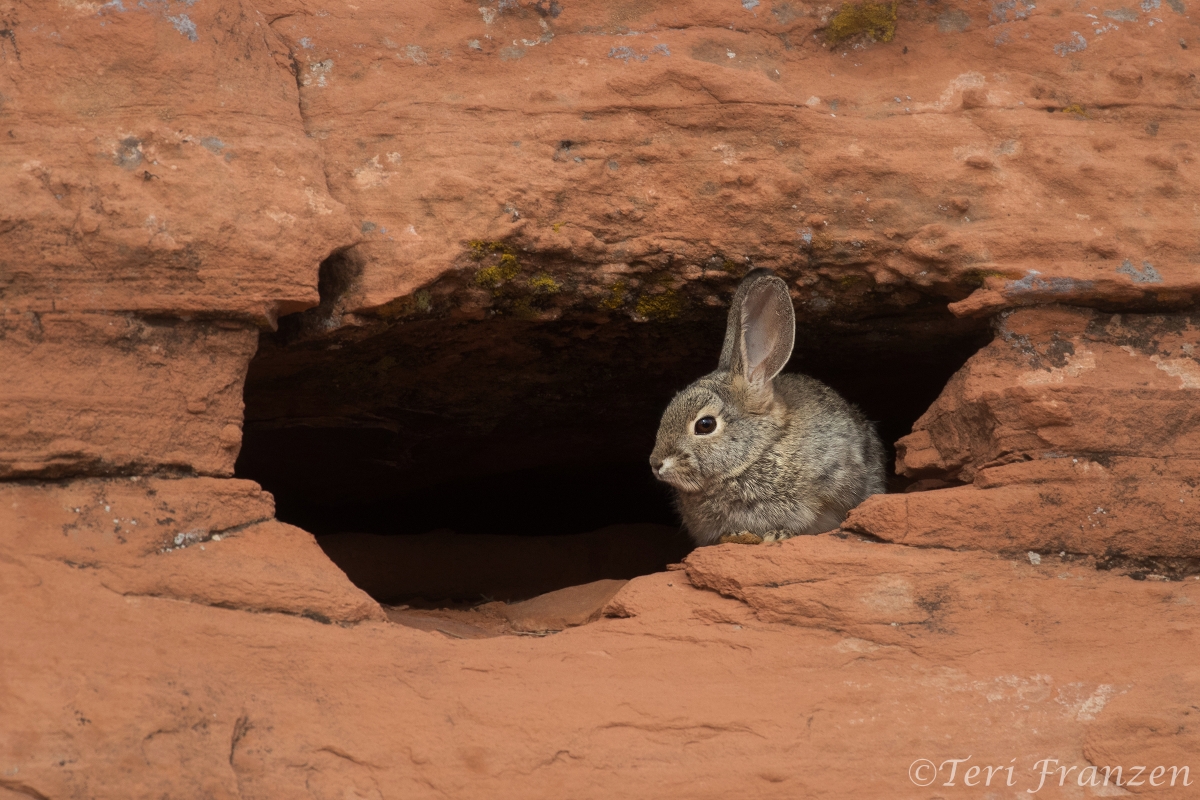 Desert cottontails inhabit burrows created naturally or by other animals. 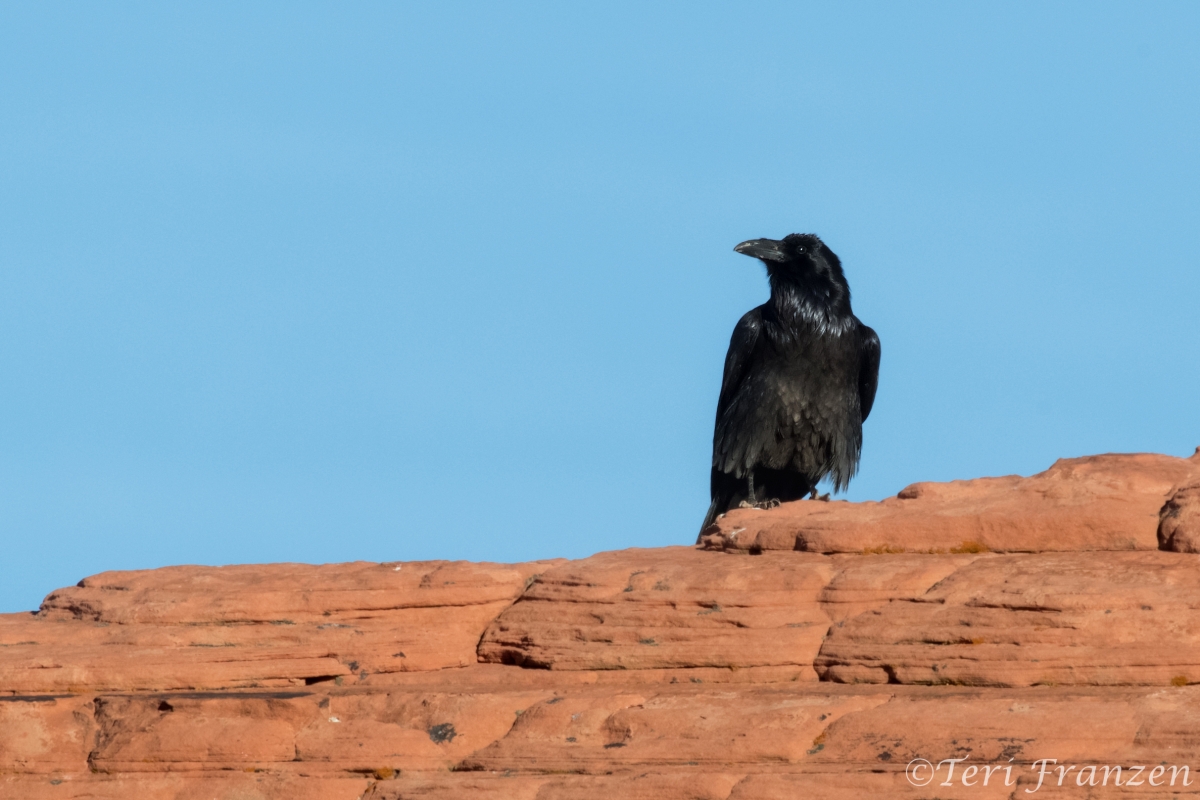 Common ravens thrive in a variety of landscapes and are most common in western, mountain states. 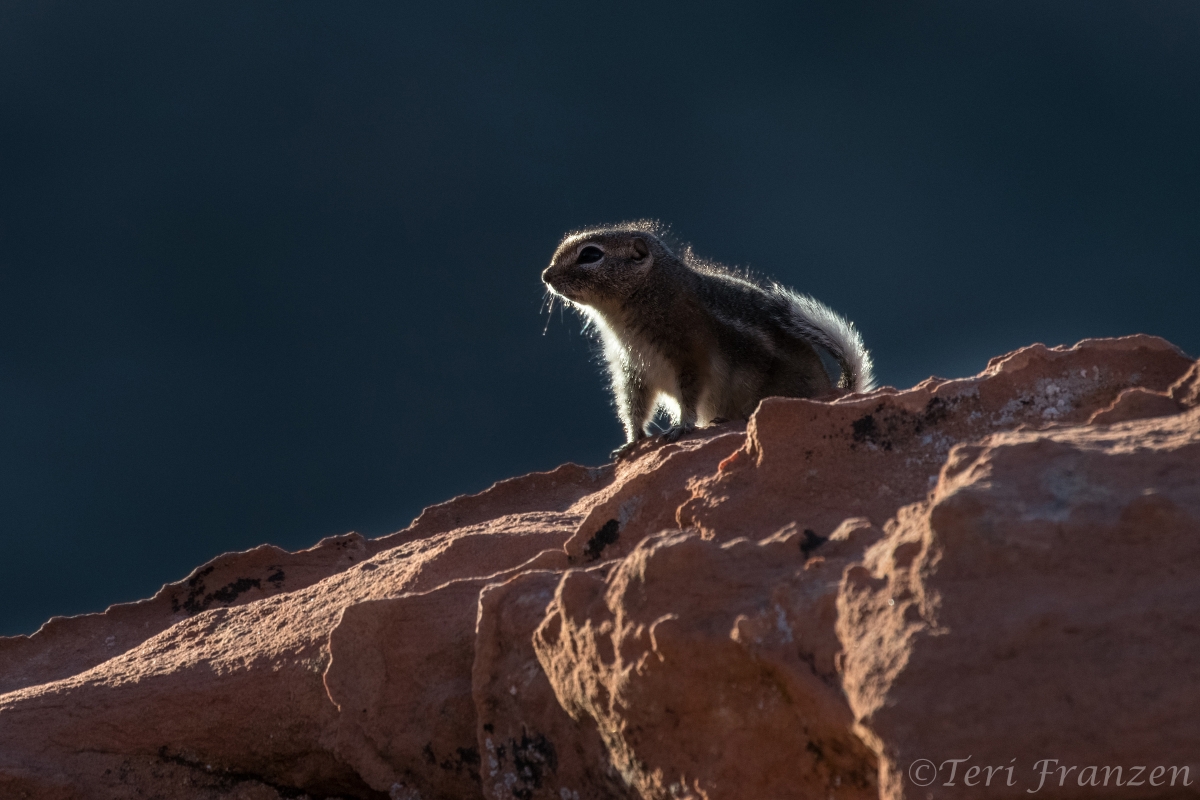 “John J. Clark was born in Canada in 1844. He enlisted as a private in Company F of the New York Infantry in 1862, serving actively in the Civil War. After being shot in the hand and contracting typhoid fever, he was honorably discharged on March 6, 1863 as a sergeant in Company B of the New York Calvary. Following his discharge, Sergeant Clark emigrated to Southern California. While traveling from Bakersfield to Salt Lake City on a buckboard (a light, four-wheeled carriage), he stopped in Valley of Fire, tied his horse to the back of the wagon and wandered around, possibly looking for water. Eventually, he crawled under his buckboard and died, presumably from thirst, several days before his body was found on June 30, 1915.” 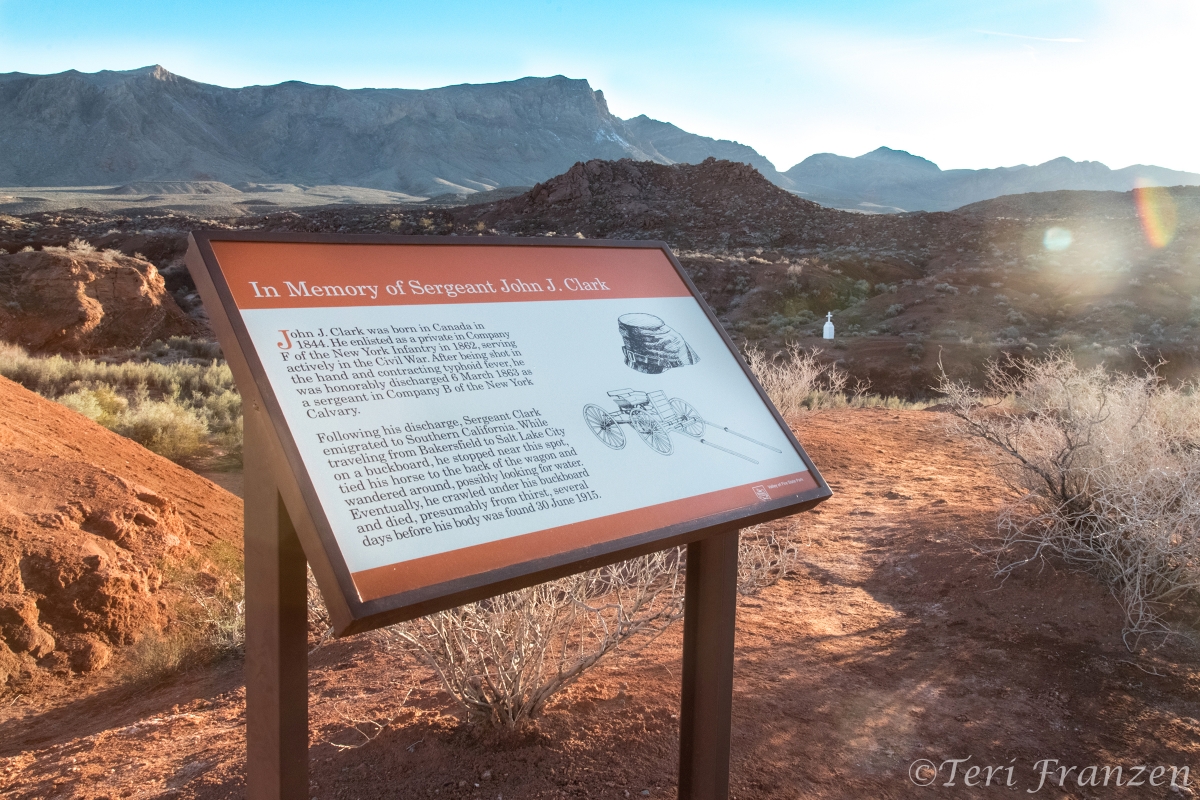 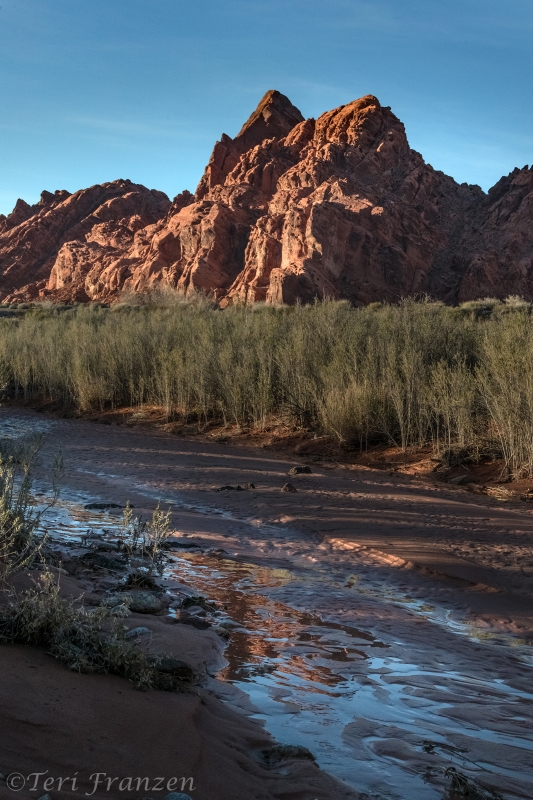 Water trickles through the channel below the Seargeant John J. Clark memorial, a war veteran presumed to have succumbed to dehydration in 1915. 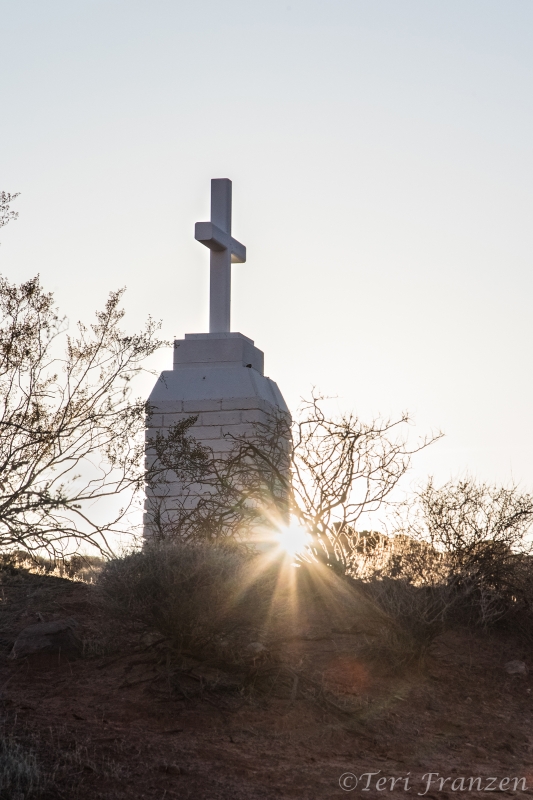 With only two days to explore, we maximized our experience but only scratched the surface.  We plan to return one day to witness rutting season when testosterone fills the air and conflict and mating are at peak.

To view more images, please browse through my album below.  Click a single image to view larger and in slideshow mode, using mouse clicks or arrow keys to move between images.  Click on an image to toggle captions on or off.