“Find a fall, or cascade, or rushing rapid, anywhere upon a clear stream, and there you will surely find its complementary Ouzel, flitting about in the spray, diving in foaming eddies, whirling like a leaf among beaten foam-bells; ever vigorous and enthusiastic, yet self-contained, and neither seeking nor shunning your company.” -John Muir

Meet the American Dipper (Cinclus mexicanus) of the family Cinclidae, also known as the Water Ouzel 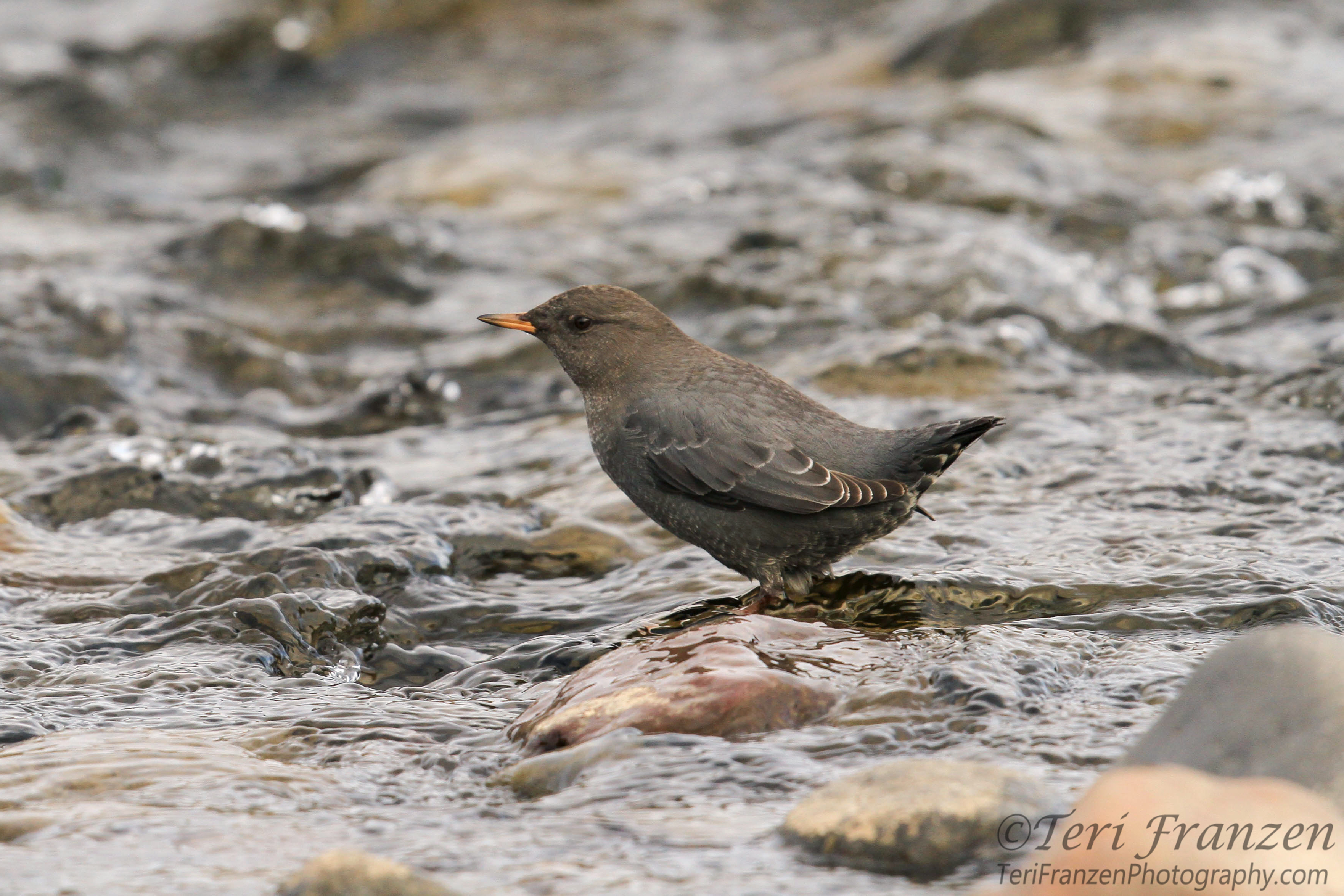 We had been driving all morning through Yellowstone National Park before stopping at a pullout to take in some of the untouched beauty of Lamar Valley.  Through the car window, I heard a beautiful birdsong drifting up from the river.  I grabbed my camera, wandered down to the bridge and immediately located the source.  I had spotted a medium-sized bird perched on a stone. So intrigued, I began taking photos.  Moments later John approached behind me and identified the bird as an American Dipper.  Although he’d never seen one before, he knew of this unique songbird.  This bird is fully aquatic in that it finds its meals in the water and is the only songbird of its kind in North America. 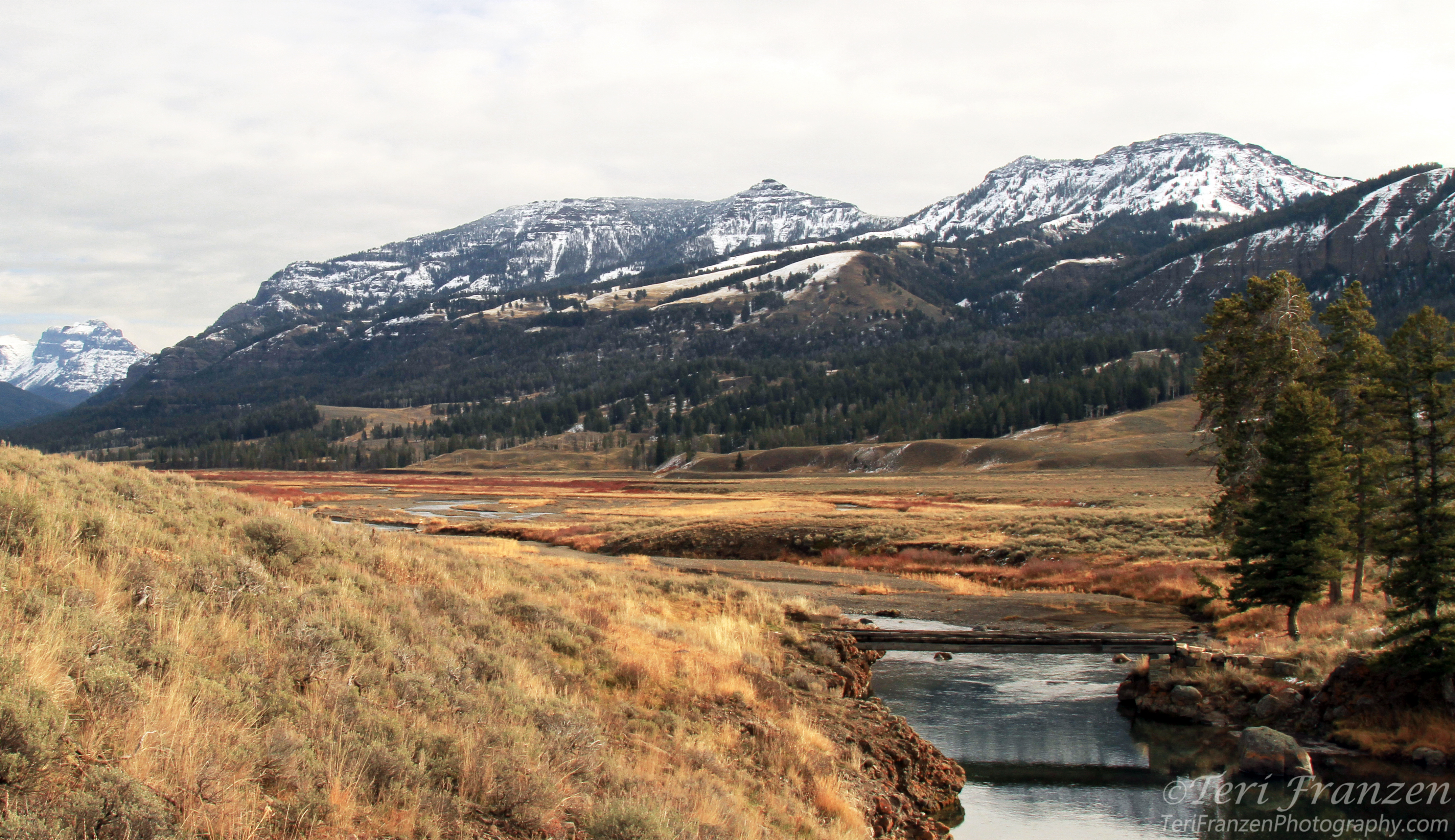 Fascinated by this discovery, we stayed and watched for several minutes while this ouzel sang, dipped and searched for prey just beneath the water.  Several times it disappeared for seconds while it dove to the bottom of the stream in search of food.  The Dipper flew from rock to rock, dipped and bobbed, dove under water and occasionally resurfaced with a catch.  Throughout  our brief visit, whenever the Dipper was above water we could hear it singing its loud, melodious, wren-like tune. 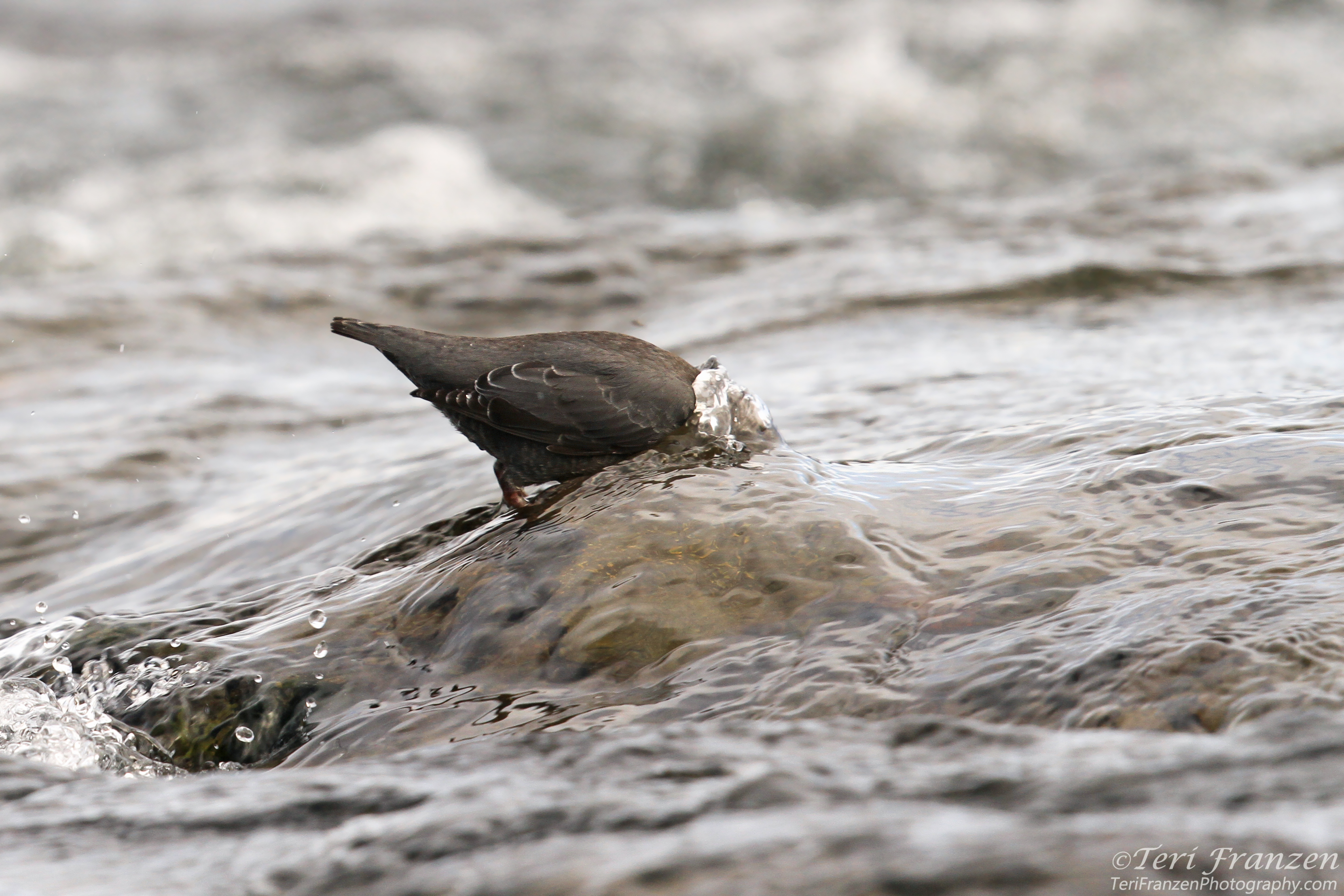 John Muir captures perfectly an encounter with the American Dipper in this quote:  “The loose snow was already over five feet deep on the meadows, making extended walks impossible without the aid of snowshoes. I found no great difficulty, however, in making my way to a certain ripple on the river where one of my ouzels lived. He was at home, busily gleaning his breakfast among the pebbles of a shallow portion of the margin, apparently unaware of anything extraordinary in the weather. Presently he flew out to a stone against which the icy current was beating, and turning his back to the wind, sang as delightfully as a lark in springtime.”

Many birds sing only during breeding months in the hopes of attracting a mate and to warn off other males.  This bird sings all year round, yet it lives a solitary life by choice and only pairs up during breeding season.  We had spent only a few minutes with this American Dipper but they were some of the most memorable and rewarding of our week-long journey through Yellowstone.  I’m so grateful for its song that led us to this new adventure. 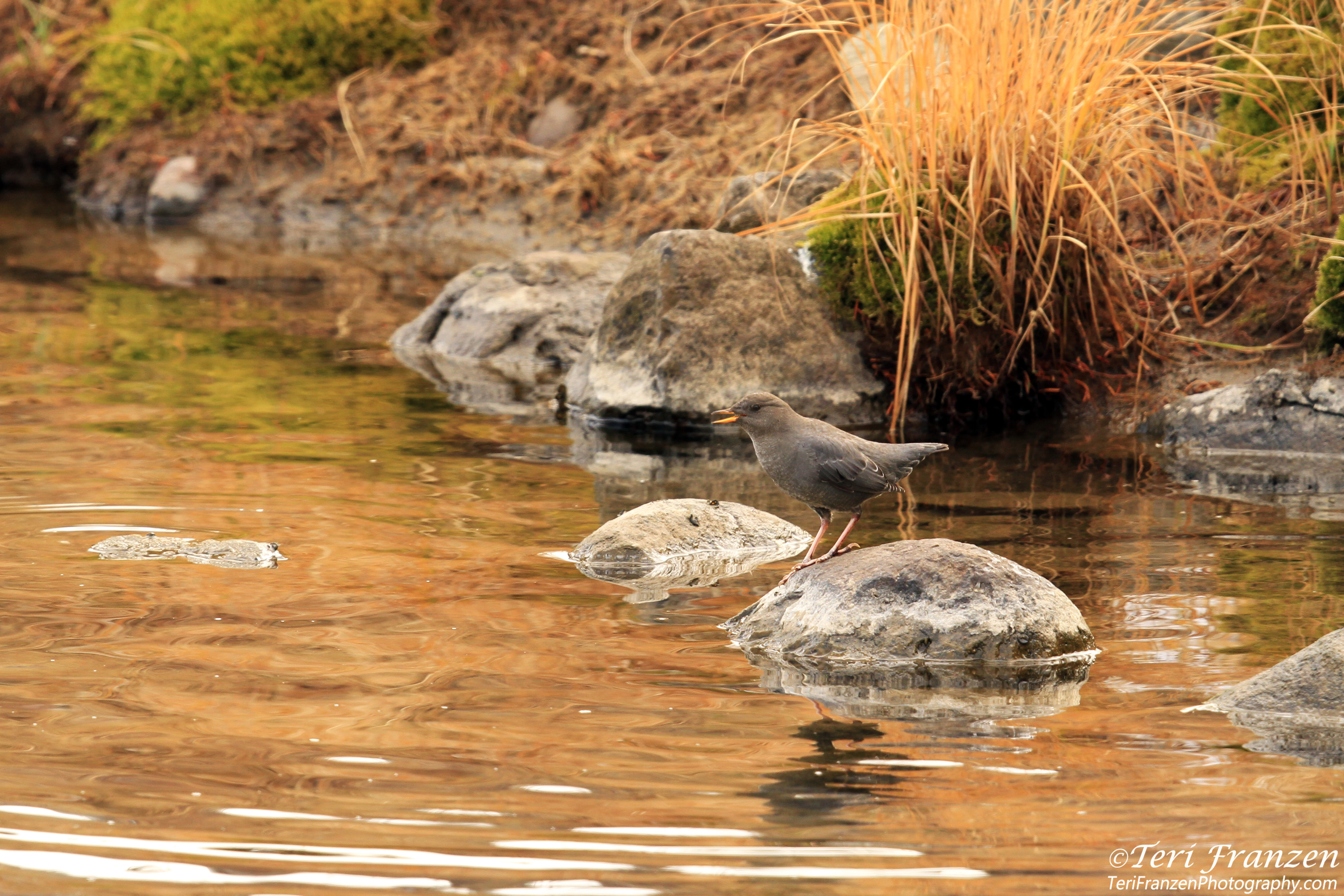 Because of its need for clean water streams or rivers the Dipper is an indicator species of water quality. If you see one in a stream or river, you know the water is free from pollutants. 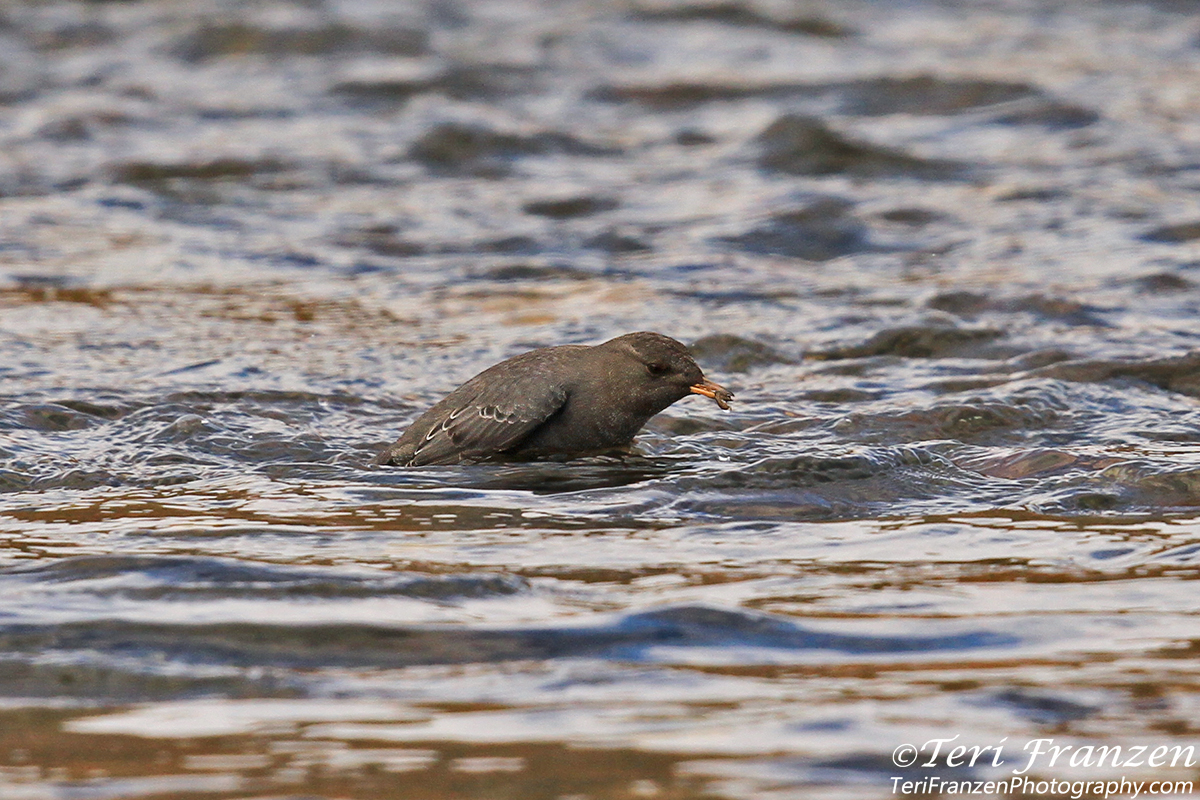 American Dipper with a Catch: The Dipper feeds on insect larvae, small fish, fish eggs, tadpoles and other invertebrates. 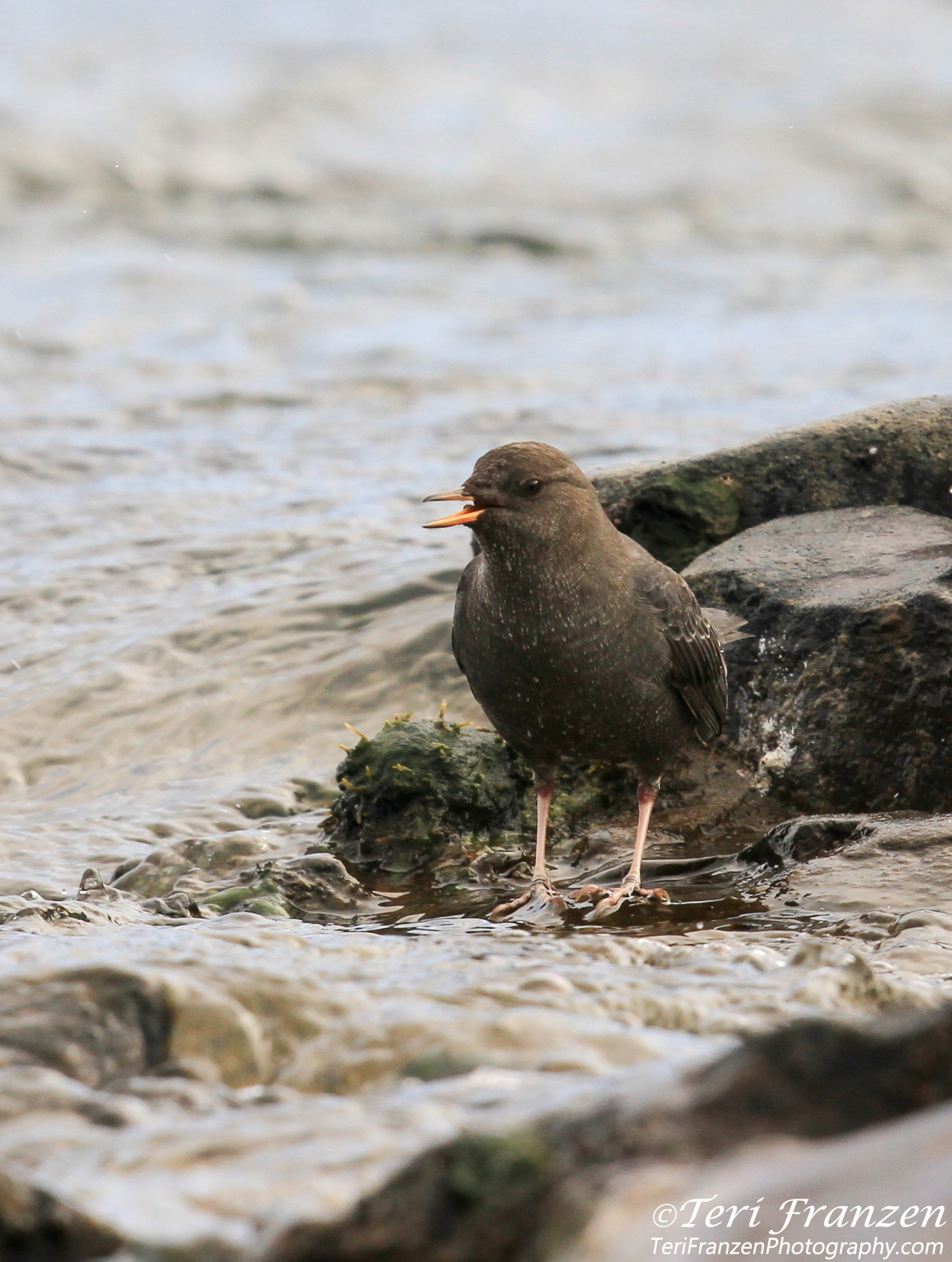 The American Dipper is a stocky, slate-gray songbird that is approximately the size of a European Starling or Cardinal. 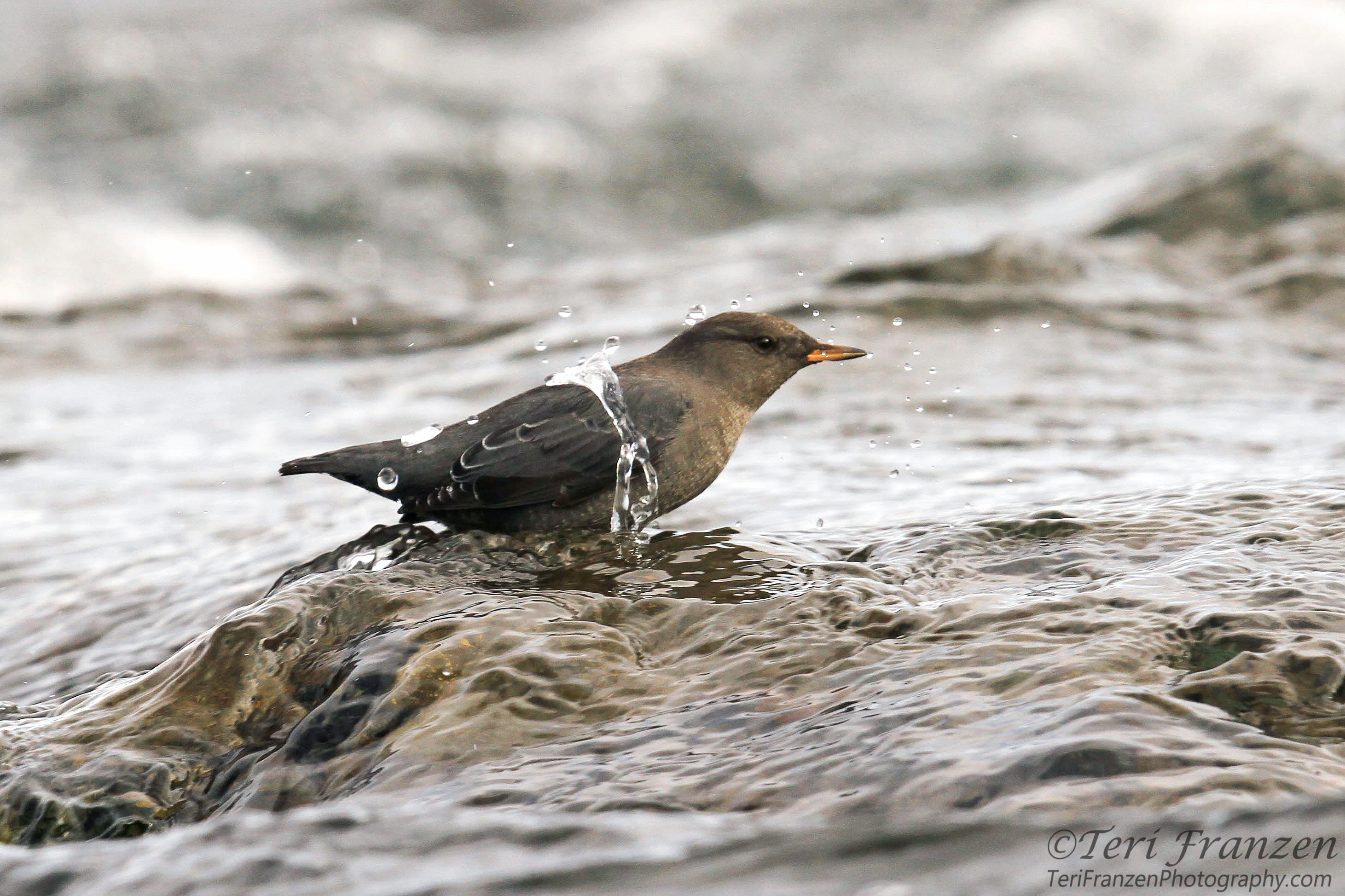 The water rolls right off the well oiled feathers of the Dipper. Its preen gland is much larger than other birds of its size, as much as 10 times the size of that of a typical songbird. The extra oil provided by the large gland allows the Dipper to waterproof its feathers for its underwater activities. 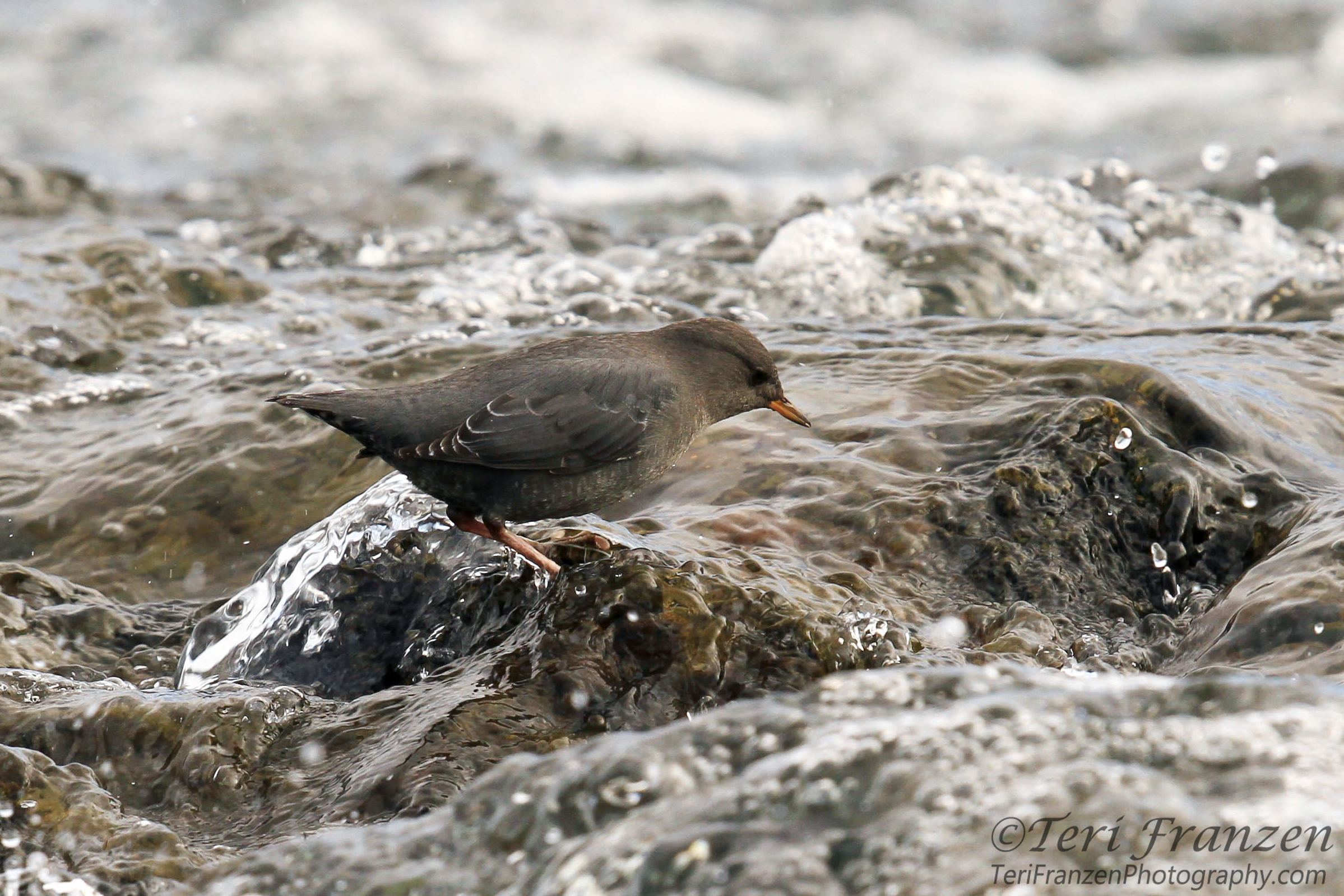 This bird makes its home in fast-moving water of mountain streams of western North America, ranging between Alaska and southern Mexico. 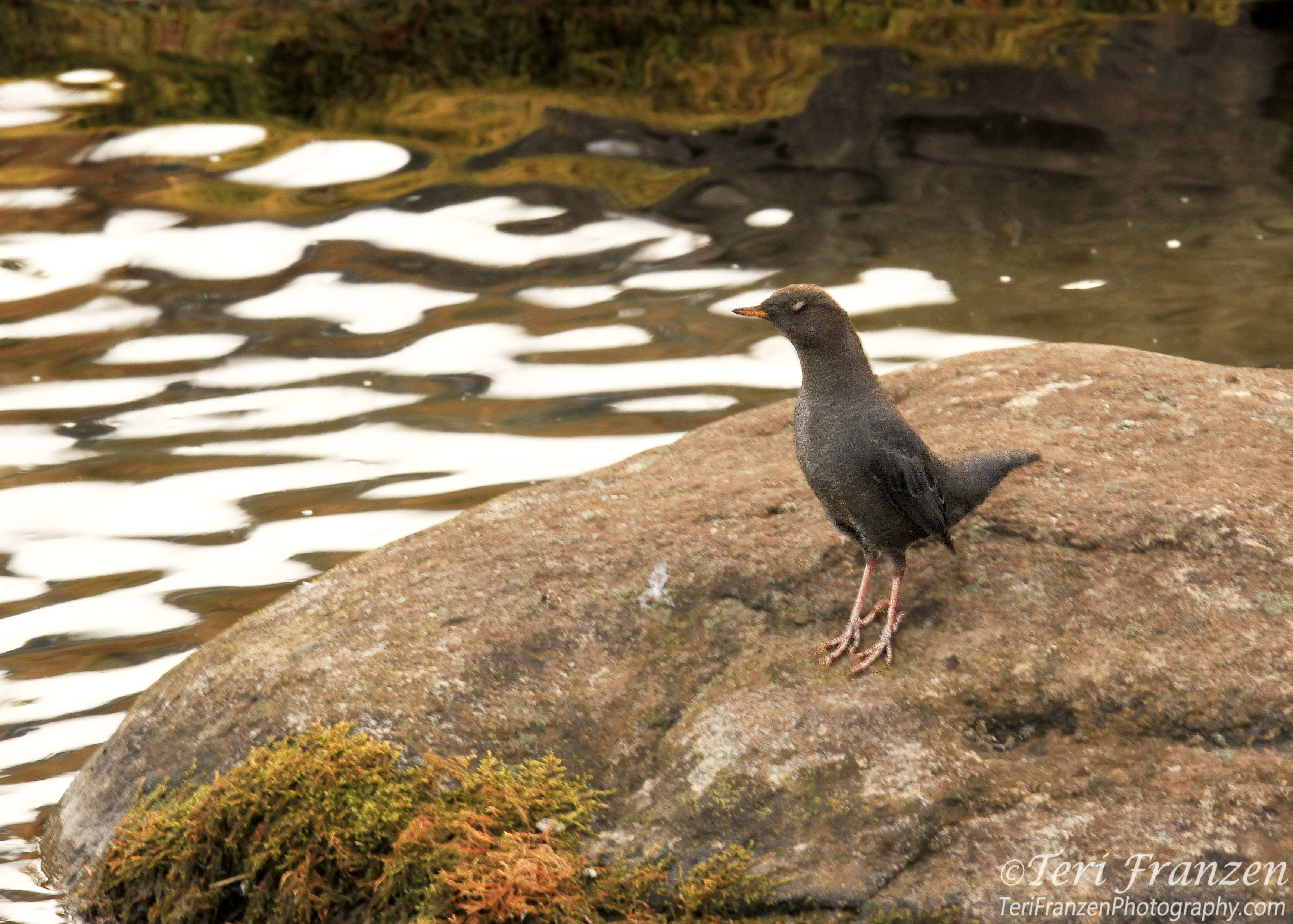 The Dipper has white eyelids and a nictitating membrane, a second flap that covers its eyes while still allowing it to see under water. A moveable flap, or scales, cover its nose and keep out water during its dives.

Me photographing the Dipper in its beautiful home of Lamar Valley on November 2014 (photo by John P. Baumlin)

This story has been reproduced as it was first published in early 2015.  It was only updated to put into blog format.

2 thoughts on “Meet the American Dipper”