Home »Blogs»The Call of the Loons

“The eerie calls of Common Loons echo across clear lakes of the northern wilderness.” – Cornell, All About Birds

It started as a trip to visit family. My parents are pulling stakes from Wisconsin’s north woods. I wanted to say good-bye to the lake home where I had enjoyed countless family holidays through the past three decades.

Having sold their lakeside residence before my deep dive into photography, my parents’ current, smaller cabin is landlocked and further into the woods. The first evening of my visit, I drove to a public dock to watch sunset. It had rained all day, and the light filtering through the swirling clouds was a deep orange, producing a scene reminiscent of Jupiter’s constant storm system. 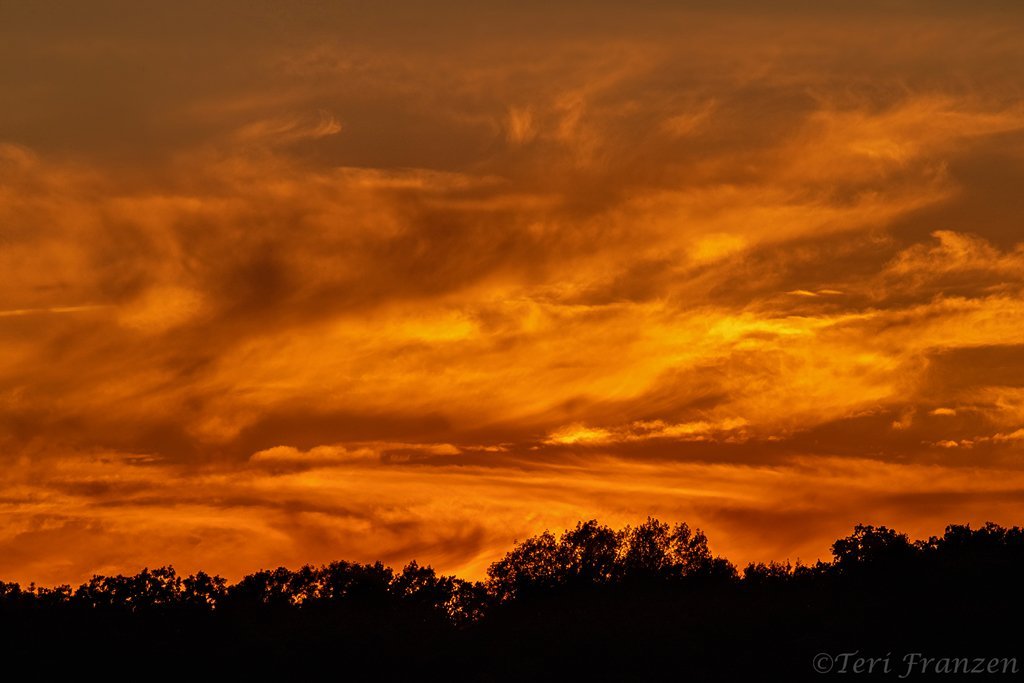 It was so beautiful I decided to return in the morning. The next day, as the sun kissed the horizon, I heard faint calls in the distance.  Common loons were announcing themselves, possibly to establish their territories or as a warning to intruders.  I listened for several minutes until one call grew louder. Just then a loon flew overhead, followed by another. Common Loons are large divers and spectacularly beautiful in their dark, iridescent, checkerboard plumage. During the summer months they are raising families on this lake.  Having caught a glimpse, I knew it wouldn’t be enough. I had to get closer. 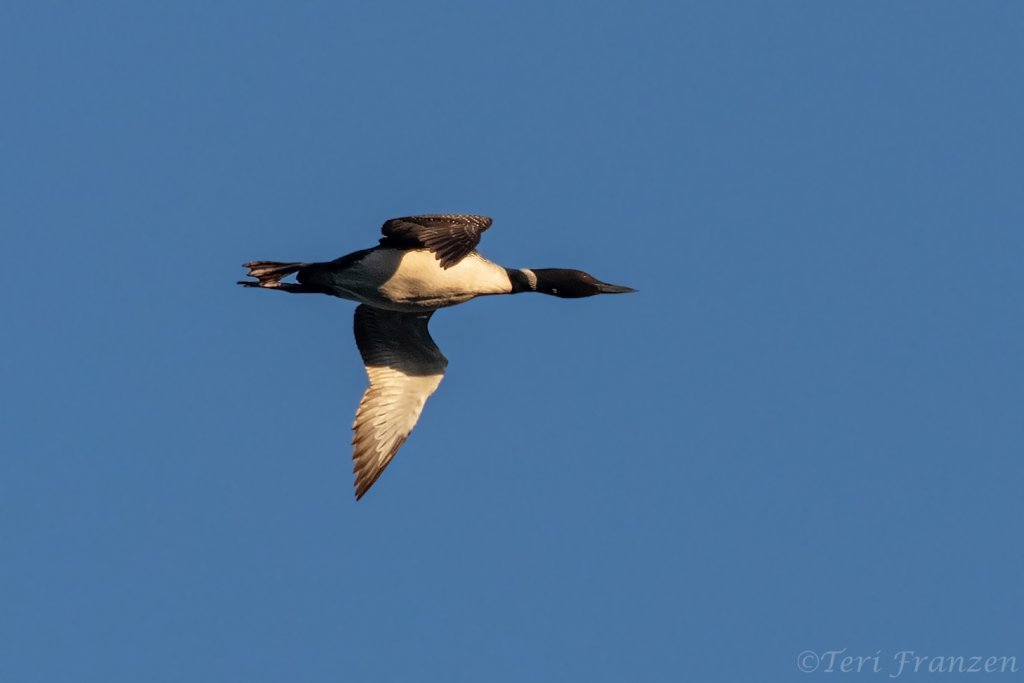 That morning I drove around the lake scouting for a spot that would bring me closer to the source of the calls.  My search yielded a shoreline populated with private resorts and residences, nothing open to the public.  I returned to the cabin with a plan to explore other options.  That afternoon, lakeside neighbors I had never met stopped in for a visit. As they were leaving, I mentioned my desire to find the loons and asked if I could sneak down to their dock at first light. Their response, in a nutshell, “absolutely, but you should take our paddle boat out instead”.  Not giving them a chance to reconsider, I accompanied them home.  We dragged the boat into the water and tethered it against the dock where it would be ready for my early start.

I was so excited that night I barely slept. Four-thirty finally arrived and I leaped out of bed, dressed in warm clothes and grabbed my gear. Guided by the light of my phone, I found my way down to the dock. The neighbors were very kind to leave a life vest which I gratefully donned. I jumped into the boat, pulled my gear in from the dock, released the rope, and was off on my adventure!

Red Cedar lake is relatively large at 1897 acres of open water.  The cool air against the warmer water produced a low hanging curtain of fog, making visibility difficult. As I paddled into the mist I was hit by a wave of uncertainty, feeling every gallon of that massive body taunting me. These large divers could be miles away.  Or worse, they could be close but I wouldn’t even see them!

I had paddled only 50 yards when I spotted movement in the distance.  Shapes began to form and I saw two larger birds, moving toward a much smaller one.  I focused my binoculars to discover I had, miraculously, found a family of common loons!

For a few minutes I moved slowly and cautiously, trying to get a little closer without moving directly toward the family. I didn’t want to interfere, only to watch. Gradually, I found myself close enough for good views but still at a distance where I wouldn’t be a threat. 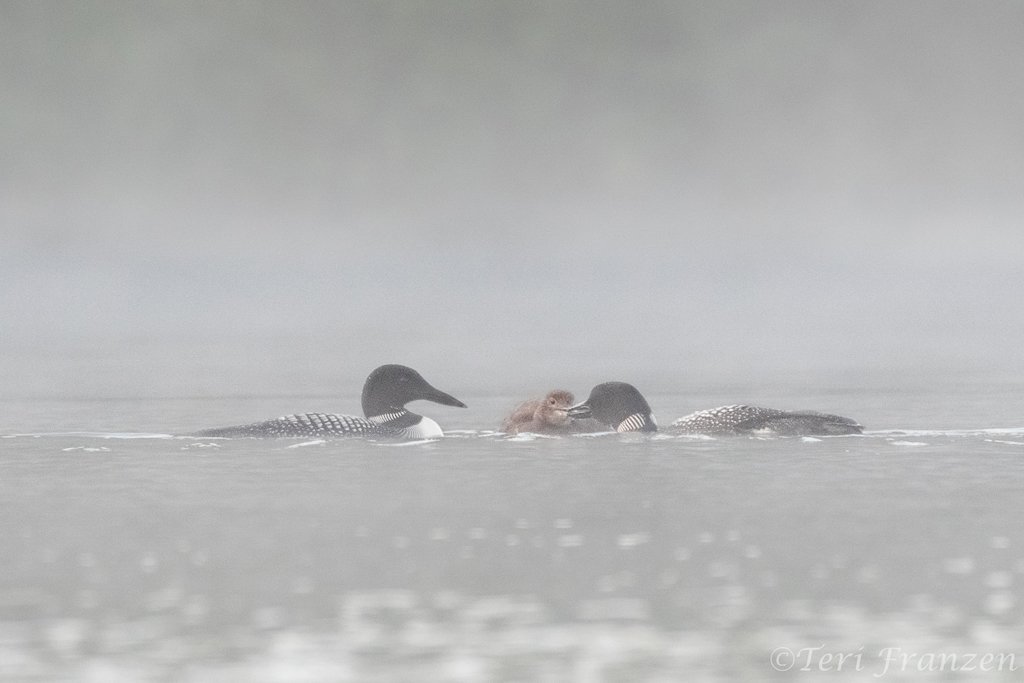 Common loons are monogamous and committed to one goal throughout the breeding season, raising their fast-growing young. Typical brood sizes are one or two, rarely more. I watched for several minutes as each adult dove under the water, then several seconds later resurfaced with a catch. The adults would swim over to feed their young and then dive again. For several minutes they continually dove, resurfaced, greeted and fed their young, repeating this behavior over and over.

After an hour the mist began to clear, revealing a beautiful sunrise. Through the fog I had felt invisible, watching as a “fly on the wall”.  Now, from about 80 yards away, the male began to swim in my direction. Twenty yards from my boat he began to call and scoot across the water in a territorial display.  It was unclear why I was a threat, considering the large size of the lake and my distant vantage point. 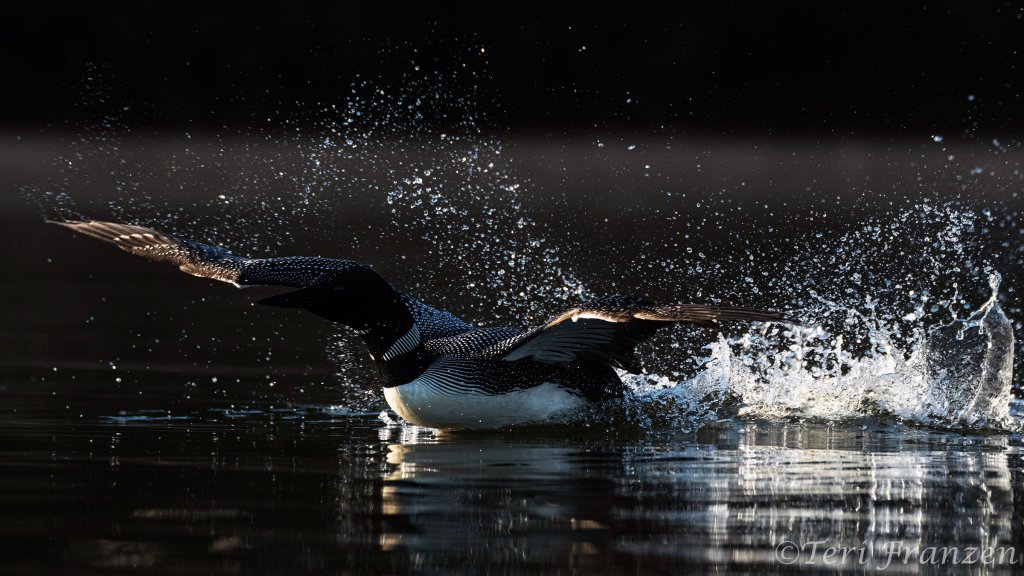 I had begun to paddle away when I looked back to see the female and their baby also swimming toward me.  They then turned, moved right past the male and continued eastward.  The father loon must have been warning me to keep my distance, clearing the way for his family to travel through the area. The male joined the mother and their young loon and I watched them swim into the distance. 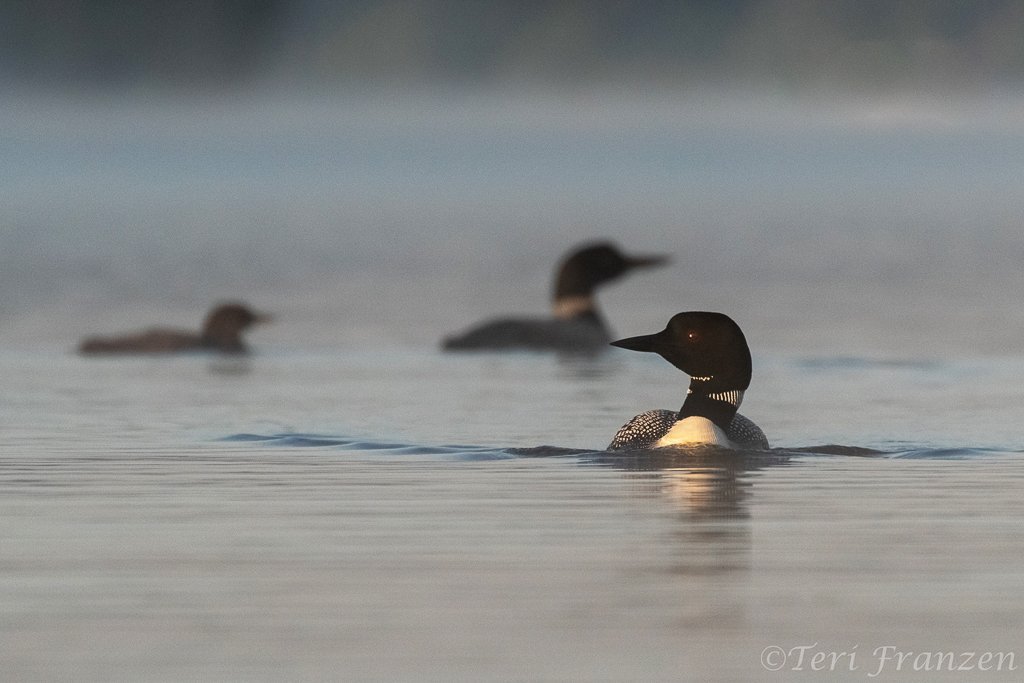 I returned to the shore after that final encounter, breathless with excitement and bursting to share my good fortune. I feel so lucky to have had this opportunity and thankful to our neighbors whose generosity made it possible for me to answer the call of the loon.

While the fog was at its most dense, photography was difficult so I attempted a little video.  It’s very difficult to keep steady on a boat, especially while holding a large lens.  Nonetheless, this encounter was so powerful for me that I felt it too good not to share.  All loon calls were recorded by me.  I captured the opening calls with my cell phone while standing on the dock.  They were distant and faint but I managed to clean it enough that it sounds exactly as I heard it.  The closing calls were warnings from the male as he cleared the way for his family to pass through.  I doubled the track and randomly staggered the second copy, muting it slightly to emulate mates calling to each other.

So bump up that volume and enjoy! My hope is that you will catch a small bit of the thrill I felt during my private audience with the common loon family of Red Cedar Lake, Wisconsin.

Below is the full suite of images from my loon encounter. It also includes the rest of the nature images that I photographed during my three days in the north woods. Click to view larger and view the slideshow.

5 thoughts on “The Call of the Loons”