“Without death there can be no life” – John Burroughs

On the shore of Long Island, common terns viciously attack their own chicks, leaving them limp and struggling. In Africa, when a male lion takes over a new territory, he will typically kill all existing cubs in his new pride. In Hog Island, Maine, to the horror of thousands of web-cam viewers, bald eagles plucked a nearly grown osprey from its nest. 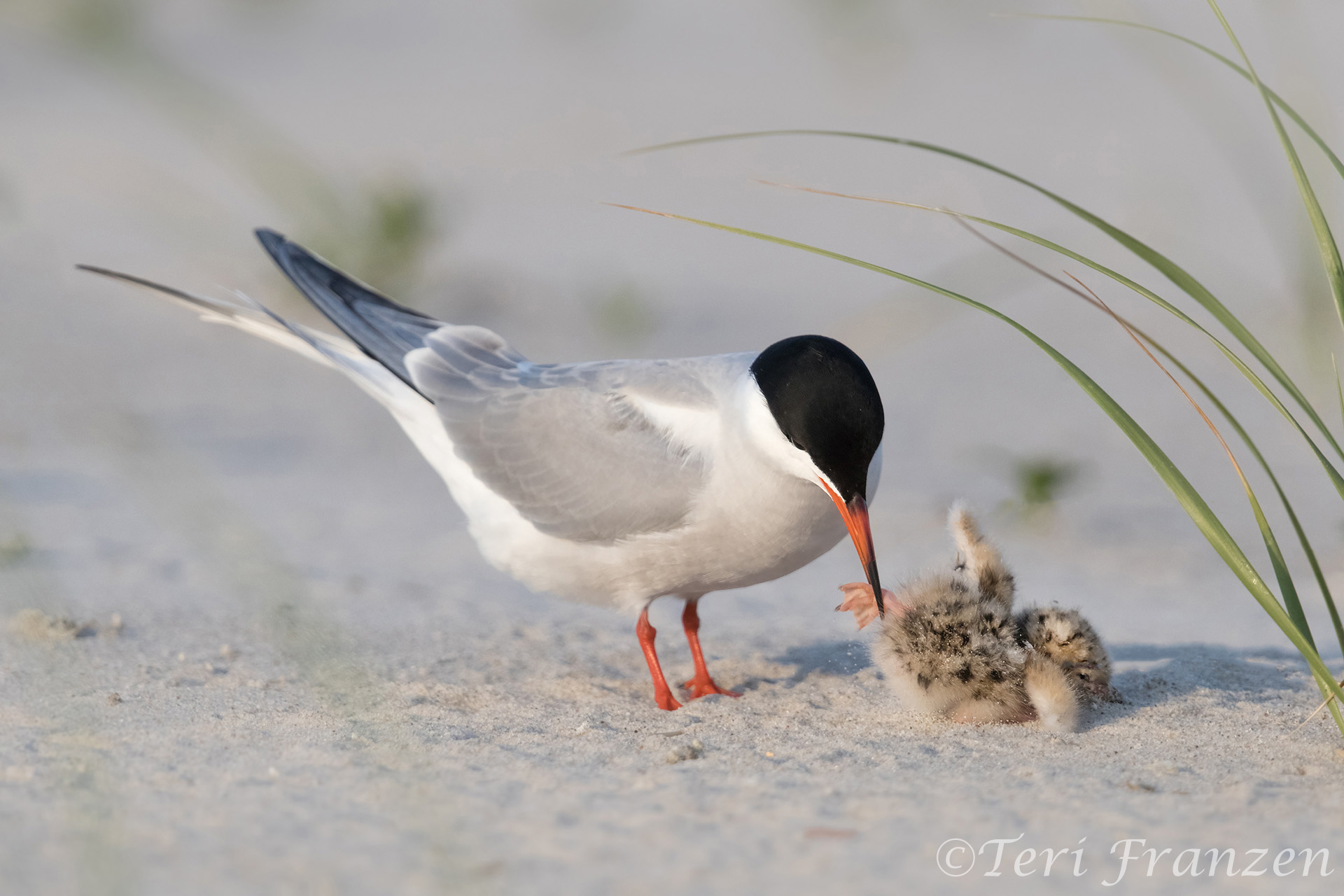 A common tern chastises its young nestling for indiscretions only understood by the attacker.

In Pennsylvania, during the spring of 2018, I arrived at the cliffs expecting to observe a family of four nestling peregrine falcons. Instead, after painstakingly concealing myself within a makeshift blind, I peered through my lens to see one nestling lying dead as flies busily flitted about the corpse. I waited and watched for more than an hour with increasing trepidation. There was no activity within the nest other than occasional visits from the adult. Gone in the night, three four-week-old peregrines had vanished with a fourth left behind, dead from the melee. This was decidedly a result of predation by great-horned owls, fishers or other known predators. A species still recovering in the eastern United States, this family of falcons had already bucked the odds to lay claim to these cliffs. I was heartbroken. 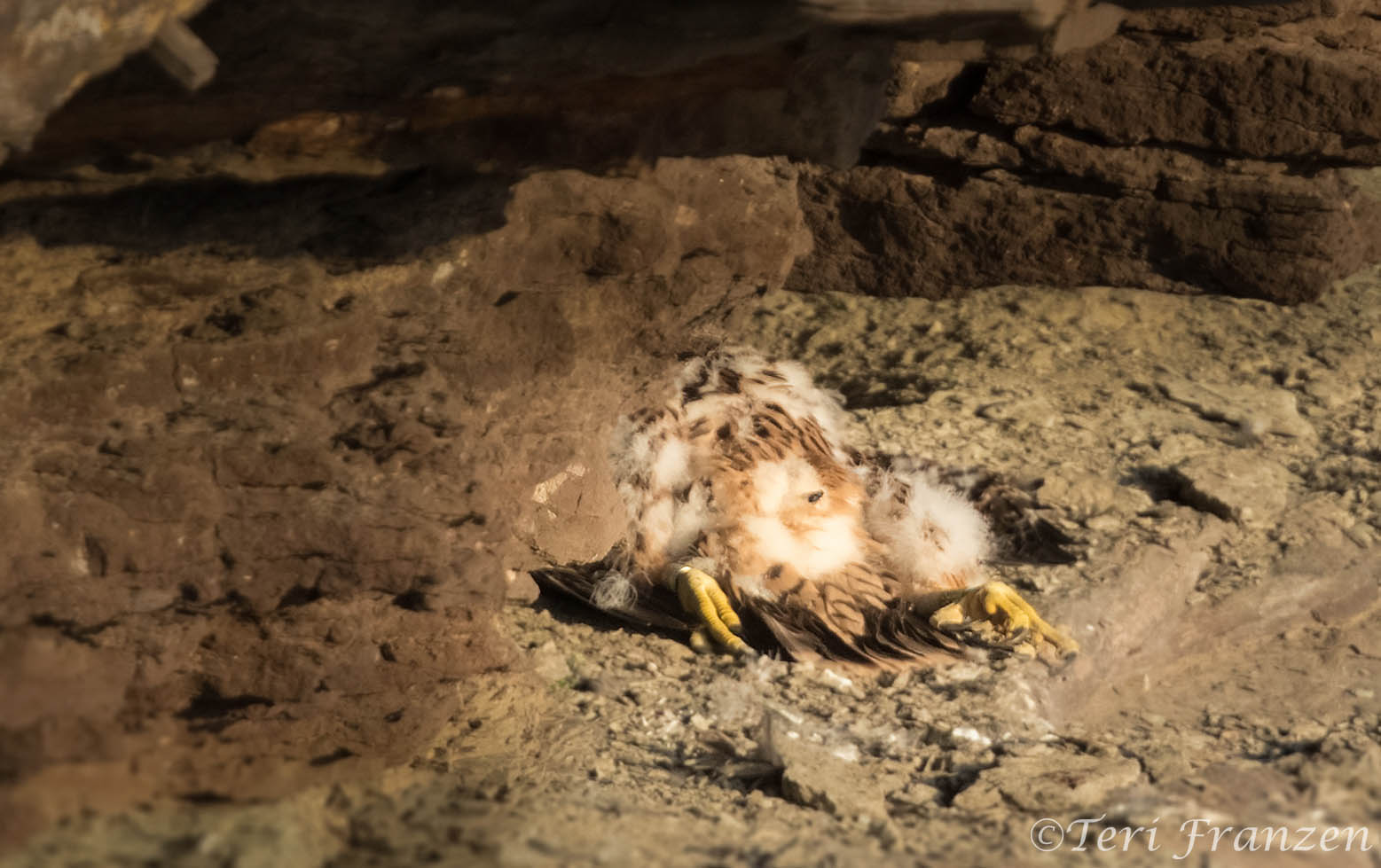 In one of only eight active cliff nests in Pennsylvania, a family of Peregrines is struggling to raise a successful brood. In 2017 two of three nestlings were lost to predators. In 2018, an entire family of four, four-week-old nestlings were wiped out in one night. Only this lone, dead nestling remained which was also taken in the night.

We rush to assign malice to these acts without attempting to understand the perspective of the attacker. The male lion’s primary purpose is to propagate his genes. When assuming leadership of a pride, killing existing cubs will send the adult female into estrus. This allows him to produce a new brood and further his legacy. Terns breed in large colonies alongside other seabirds and will aggressively defend their small territories. Possibly the adults are educating their young to remain within boundaries. Shortly after the attack, I watched as the tiny tern laid still for several minutes. It then limped over to its parent who tenderly welcomed the chick under her feathers. 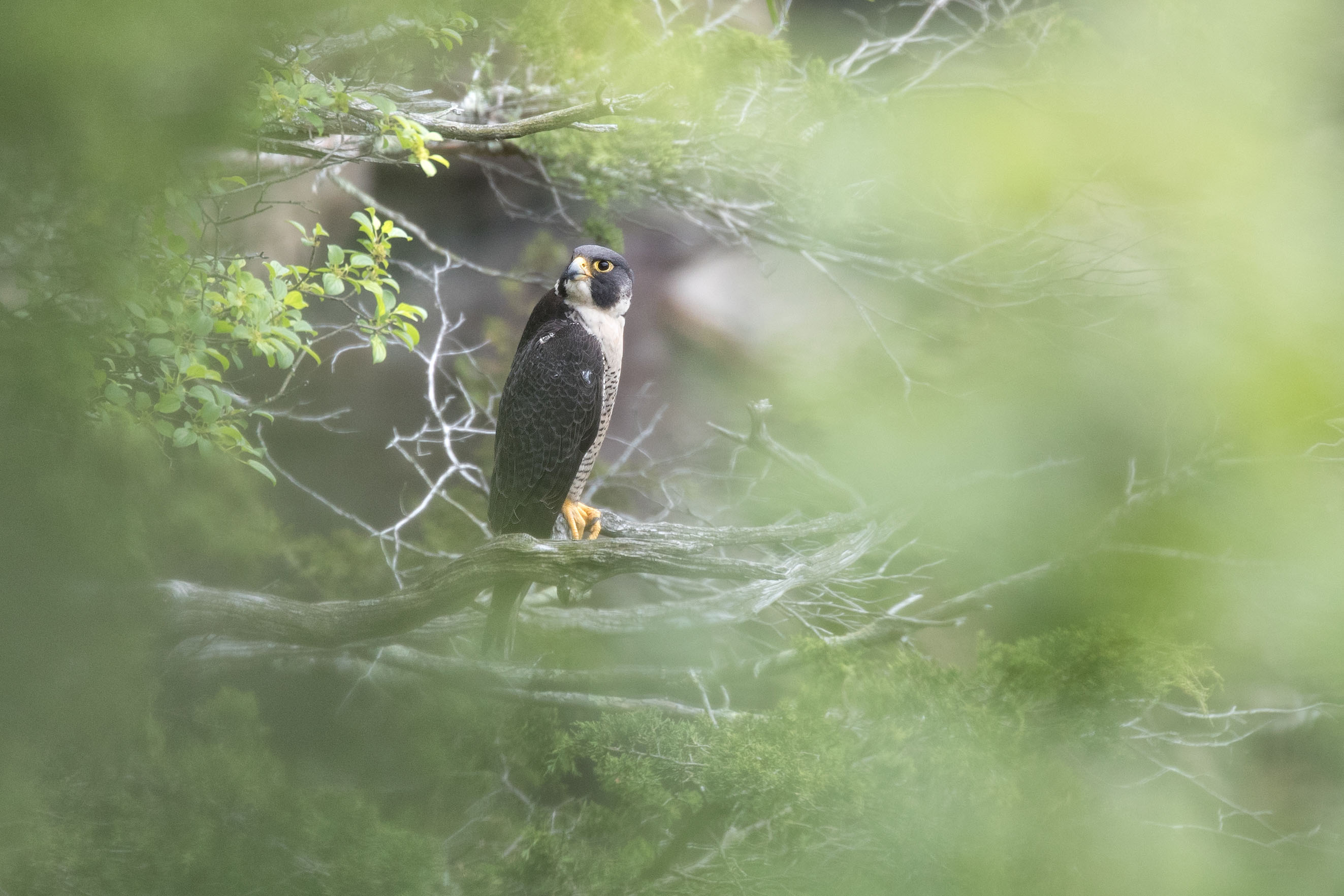 The peregrine falcon, reluctant to relax her maternal role after losing her entire brood to predators.

During springtime, while ospreys and peregrine falcons are raising their young, bald eagles and great-horned owls are also feeding their own fast-growing brood. With their inability to escape, nestlings are an excellent and accessible food source. Peregrine falcons themselves feed on smaller birds which could also result in the orphaning of helpless nestlings. Nature doesn’t play favorites. Instead, it provides checks and balances, keeping populations at sustainable levels. The ospreys were left with two chicks which successfully fledged. The falcons, temporarily unsettled by their loss, returned to breed again the following spring. 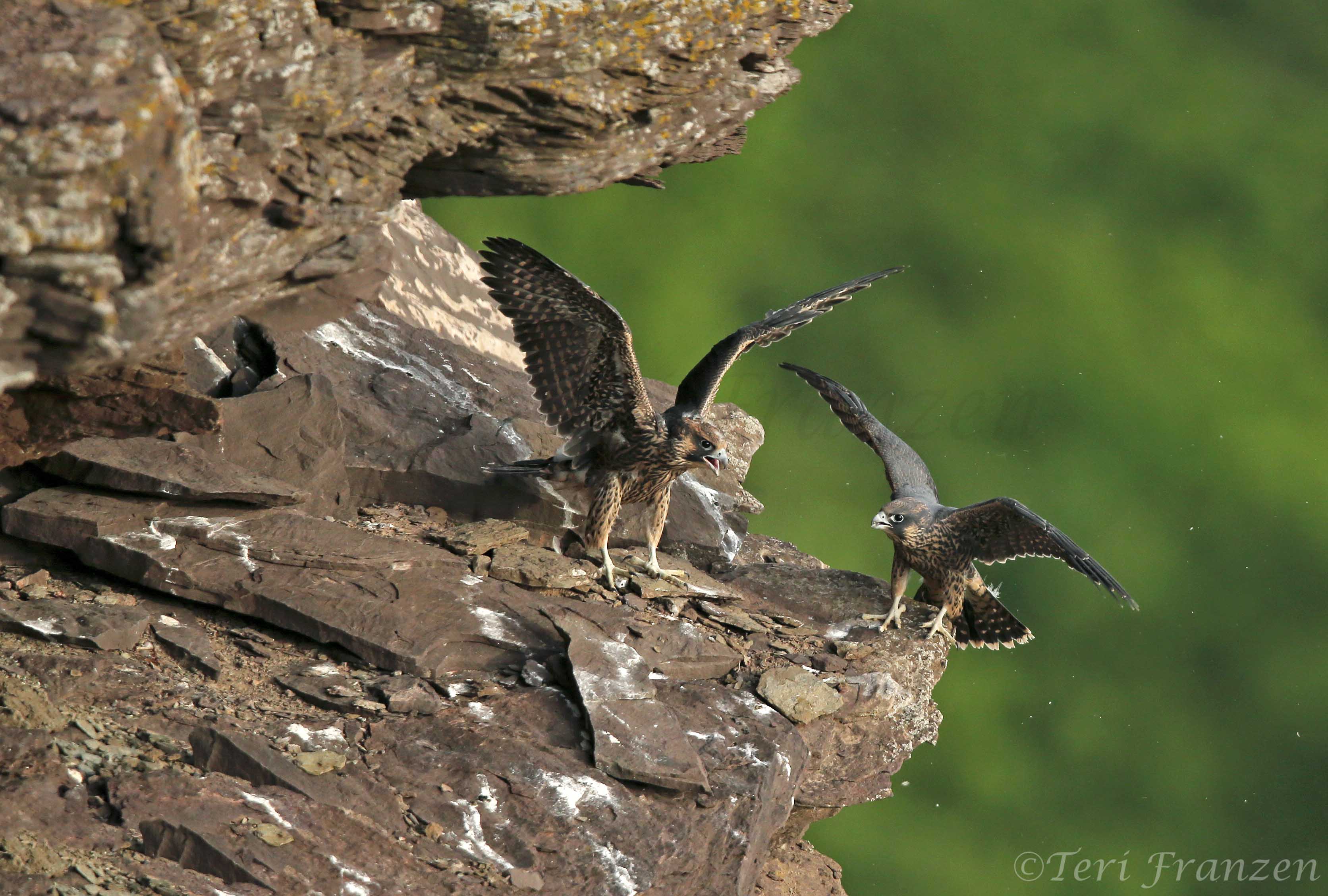 In a more successful season, nestling and fledgling peregrine falcons flap their wings in excitement, knowing that food is on the way. 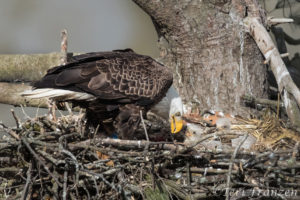 When speaking of these accounts, people will often respond with the simple phrase, “nature is cruel”. Perhaps from an anthropomorphic viewpoint, it seems cruel. John Burroughs suggested that “Nature has an anaesthetic of her own…” and that “…sudden blows benumb and paralyze.” It is thought that when under attack, wild animals are stricken with shock so great that the pain is significantly lessened, even non-existent. Moreover, natural predators often strike quickly and with ferocity so that any pain is sudden and brief. 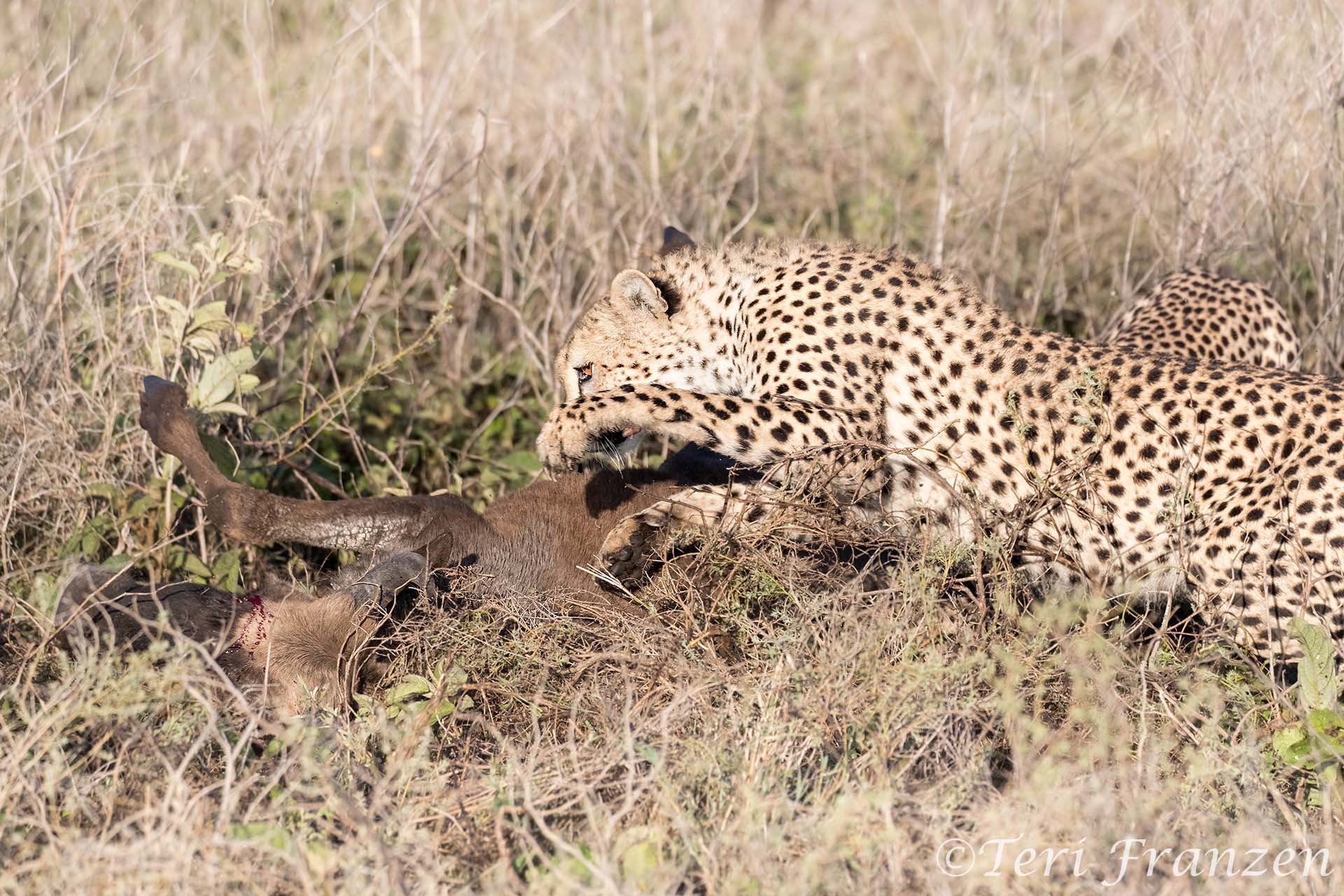 A cheetah leaps forth to quell the wildebeest that has just resurfaced from shock or unconsciousness.

In Africa, the small group within our safari vehicle watched as a two-brother coalition of cheetahs captured a wildebeest and began to feed. Our hearts leapt into our throats when, after they had fed for minutes, the wildebeest suddenly reared up, either resurfacing from shock or unconsciousness. One of the brothers immediately jumped forward, sunk its teeth into the victim’s throat and held tight, suffocating until the heartbeat was stopped. It is necessary for the prey animal to be unconscious or dead to minimize energy required by the predators. Lessening the extremity and duration of pain is therefore a necessary act by the captor.

This next image evokes a strong concern for the chipmunk. Is it still alive when carried into the nest? Logic dictates that when feeding its young, the adult red-tailed hawk would never introduce a live animal into the nest. This could lead to struggles in already cramped living quarters and precipitate risk to the nestlings. The rodent could even escape. In flight, the hawk must be in complete control which it couldn’t manage with a struggling rodent. Therefore, for the chipmunk, death would have been swiftly carried out long before delivery. 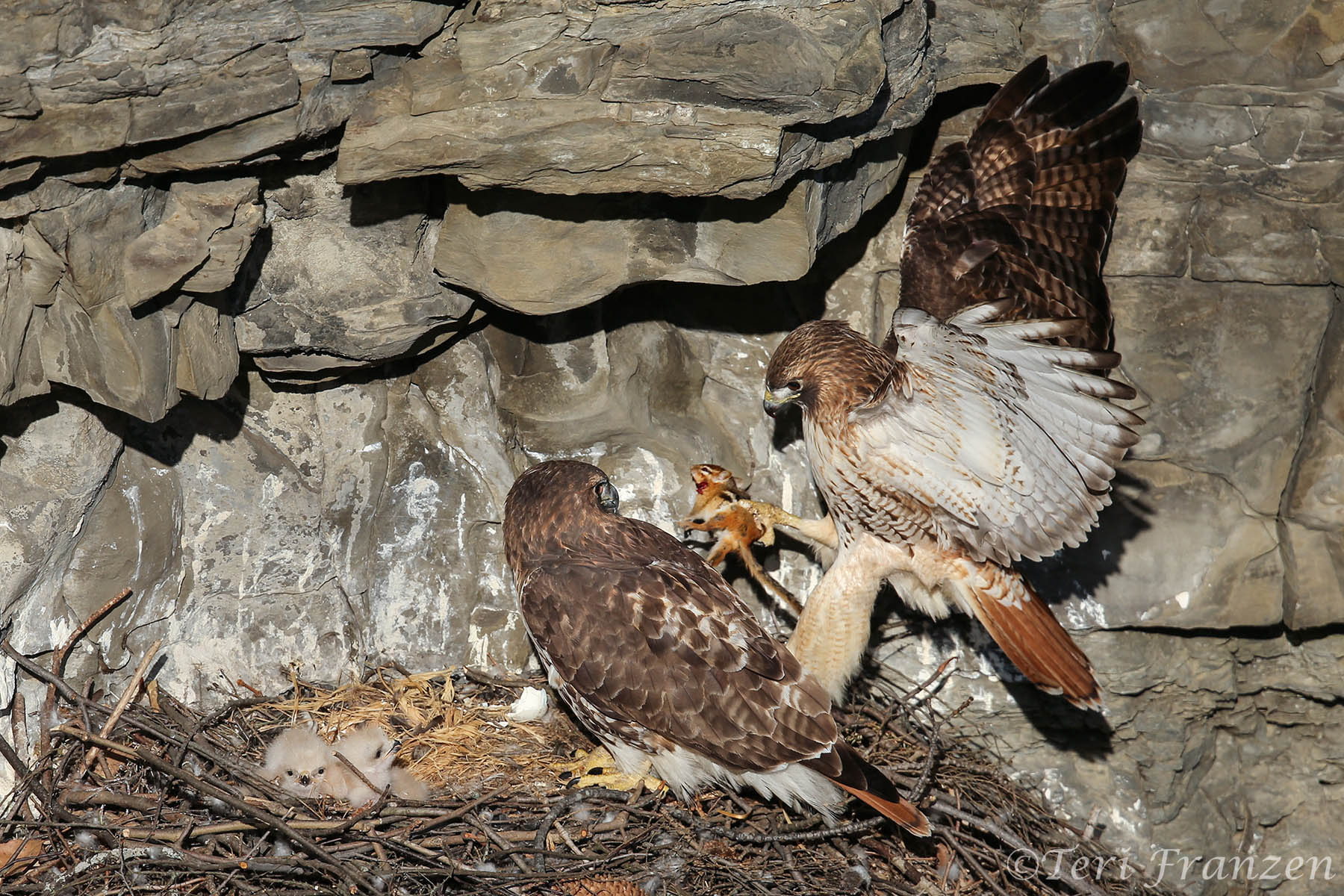 A red-tailed hawk delivers a dead chipmunk to feed his days-old nestlings.

Wild animals live their lives in the pursuit of furthering their own genetics. Every activity supports this goal. Hunting for prey, they aren’t deriving pleasure from the infliction of pain as a way of tormenting victims. They are feeding themselves and their families. Raising young, wild animals are teaching lessons not always understood by humans. We discipline our own children by giving them time-outs or restricting privileges. However inscrutable, as with terns, the methods employed by wild animals are deemed suitable for raising their own young to become successful adults. 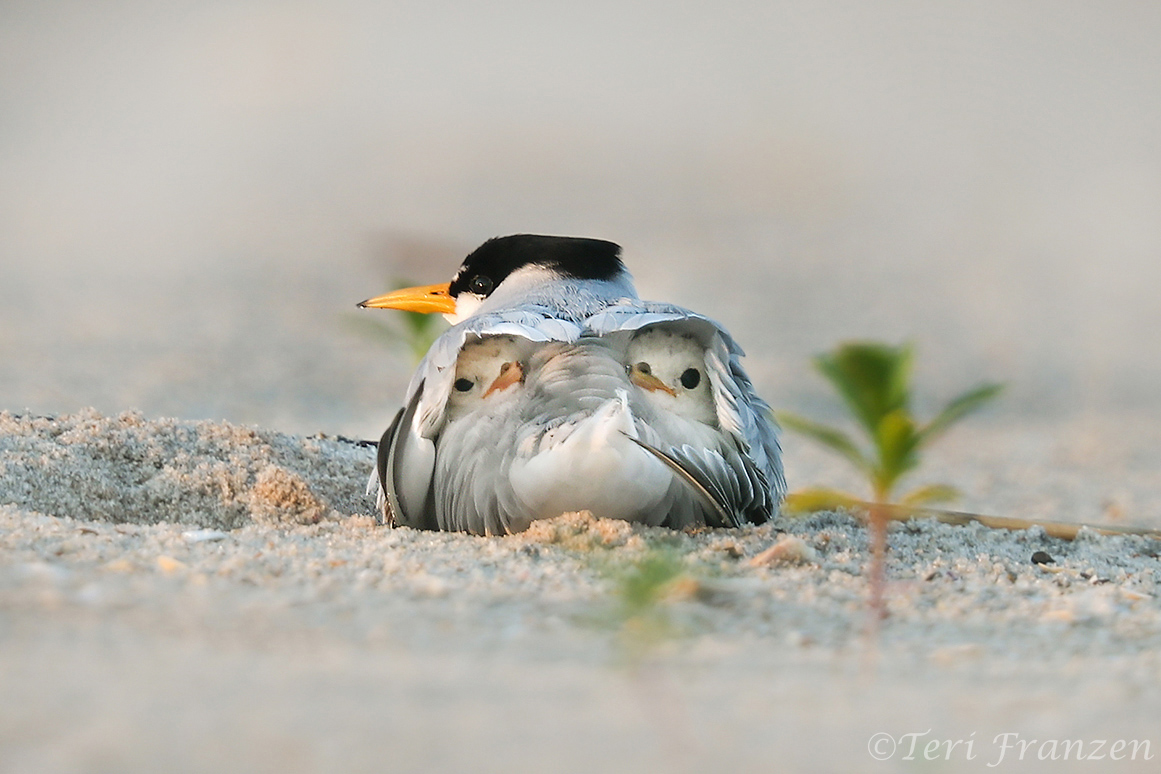 Nature’s intricate balance has evolved for thousands of generations. Death and life are inextricably linked. It may be uncomfortable for us to observe, but those behaviors have sustained wild creatures far longer than humans have been on this planet to witness. Survival in nature is tough business. Wild animals are acting out of instinct for survival, not out of cruelty. 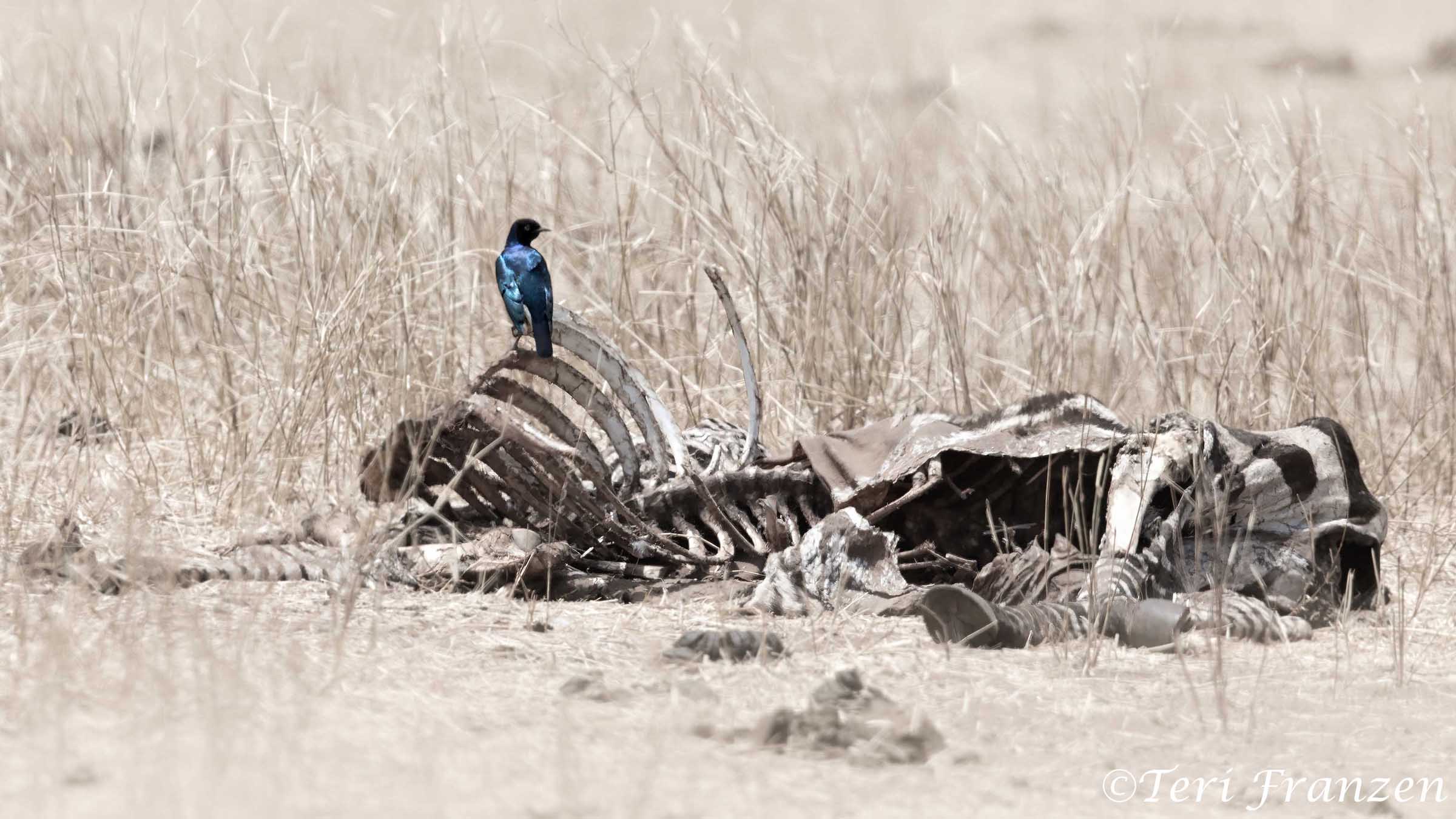 A superb starling uses the carcass of a zebra as a lookout. Nothing lays to waist in the African bush.

“Perceptions of Cruelty” Images and text by Teri Franzen

4 thoughts on “Perceptions of Cruelty”