Home »Blogs»Fourteen Days in a Blind

Today’s accessibility to stream entire seasons of a show makes it easier than ever to become hooked on a series and watch from start to finish. We fall in love with the characters, cheering their successes and mourning their failures and losses. We love watching their stories unfold, unable to wait an extra minute to see what hardships they will encounter and how they will endure.

This spring I binge-watched a unique program, spending hours staring at a box of a different kind. A hen wood duck had taken residence in one of the new nesting boxes at Brick Pond wetland preserve. On the morning after hatching, the tiny ducklings would leave the nest forever to join their mother on the pond. I wanted to see them leap into their new world.

Knowing this would happen mid-morning and with only a ballpark estimate of when incubation started, I began a vigil. My mission: arrive each day before sunrise, watching carefully for the hen to take a morning break. Wait, listening for the telltale sound of the mother calling to her brood.

One peaceful, foggy morning, I peered out my portal to see a shape taking form in the mist. A Great Blue Heron had waded far into the water. It stared intently for minutes. Suddenly a “splash!” as it reached headfirst, disappearing up to its wings. Seconds later the heron emerged carrying a catfish, flew off and disappeared into the fog.

Moments later a hen Hooded Merganser appeared, swimming in my direction. As I watched she circled the nesting box and called. Minutes later the merganser flew up to the nest cavity and then quickly retreated, followed by the sound of an angry hen wood duck. The thwarted diver returned daily, often bringing reinforcements, giving certainty to my suspicion of nest dumping. Were there hooded merganser eggs in that box along with the wood ducks? 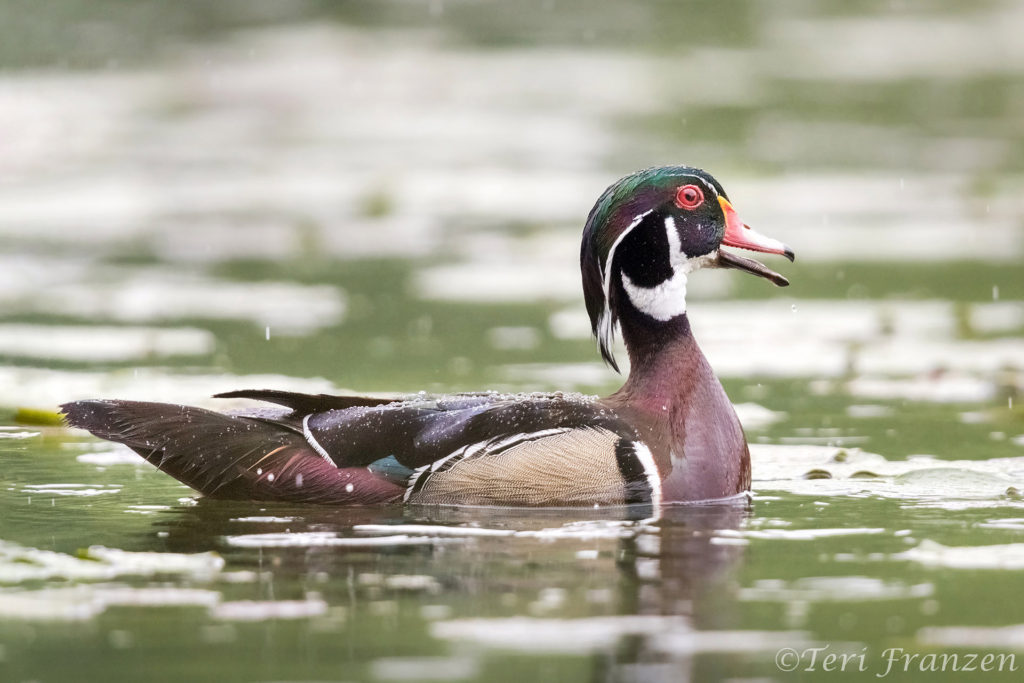 Drake wood duck with raindrops dancing on his back

One morning, after a beautiful, sunny sunrise, clouds rolled in and rain poured from the sky. Water hammered the roof of the blind while I remained safe and dry. I had often wondered what happens in a wetland during rain showers. My answer, pretty much the same as any other day. Far in the distance, a family of young wood ducklings dabbled amid the lilies. Songbirds sang their serenades. And a beautiful, drake wood duck, holding strong to his nuptial plumage, swam teasingly close to the blind, showing off his water-tight feathers as beads of moisture danced on his back.

Hours turned into days, days to weeks as I continued my morning quest. During that time I watched snapping turtles climb all over the beaver lodge, up to six at one time. Herons and grackles hunted from that same lodge. Geese used it as a perch. I was visited by surprisingly close green herons, wood ducks and a variety of songbirds.

Only on very brief occasions did I see the subject of my vigil, the resident hen of the box.


One brilliant Monday morning the hen wood duck peered out of her box and began to look in all directions. She was checking the area for threats. This was going to be it! She leapt into the water and began circling the box and calling. My excitement grew as I watched. Then she flew off. The hen flew in a large circle around the pond in both directions and back into the box. That was unexpected!

Moments later, the hooded merganser descended onto the roof. The mother wood duck peered out again. She dropped back onto the water and was immediately followed by a “plop-plop-plop-plop-plop” as five tiny wood ducklings soared out of the box to join her. Now on the water, the merganser moved toward the small group only to be chastised by the mama wood duck. The new family swam into the lilies and disappeared, leaving the lone diver in their wake. There had been no time for adjustments. I snapped a quick image, capturing only a small snip of video. Photography was tough and heavily backlit by harsh sunlight. But I had realized my dream. I had witnessed that special moment as one-day-old ducklings began life on the pond.


There had been no hooded merganser ducklings in that tiny brood. But I am certain there were more eggs in that box which did not hatch. Later this summer I hope for an opportunity to check.

We typically plan our photography outings based on quality of light. During days of bright sun we will only remain during those hours of pink and gold at sunrise or sunset. On dense, overcast or rainy days we stay home and catch up on post-processing. Doing that we miss the full story. We wouldn’t see raindrops dancing on well-oiled feathers, a heron hunting in the fog or tiny wood ducklings start their lives in the bright sunlight.

This spring I dug deeper. As I sat in the blind, serenaded by the springtime calls of songbirds and herps, I binge-watched nature at Brick Pond. I fell in love with the characters, watching with rapt attention as they struggled and applauding when they succeeded. Rarely did I experience optimal lighting. But I witnessed intriguing tales of the wetland that went far beyond a single, golden frame. I captured stories.

Below are two short videos, followed by a series of images captured during my springtime at the pond.  During my vigil I captured loads of film.  Later this summer I will publish a film chronicling the tales of these wetland wonders.  Thank you for following along!

8 thoughts on “Fourteen Days in a Blind”