Since I began photographing Wood Ducks in 2014 I have dreamed of a shot with a drake in nuptial plumage surrounded by ice or snow. Wood Ducks typically migrate south before the first snow falls so it’s not a common sight in upstate New York.

In the spring of 2016 we had a deep freeze after the Woodies had returned to Brick Pond. I thought this might be my chance to catch them on the iced over water.  The next day it was bitter cold, in the single digits, but I bundled up and trudged out to the pond to set up a blind.  What I found was that Wood Ducks don’t like to sit on ice.  Very infrequently, a duck would land on the ice, very briefly survey the area and take off.  They never stayed longer than a few seconds.  Each time, as soon as I could shift my camera to focus on my subject it had flown off. It was still a beautiful day, and once the bright sun thawed the ice the Wood Ducks swam out, staying far across the pond on the open water.  There would be no Woody on ice for me that year. 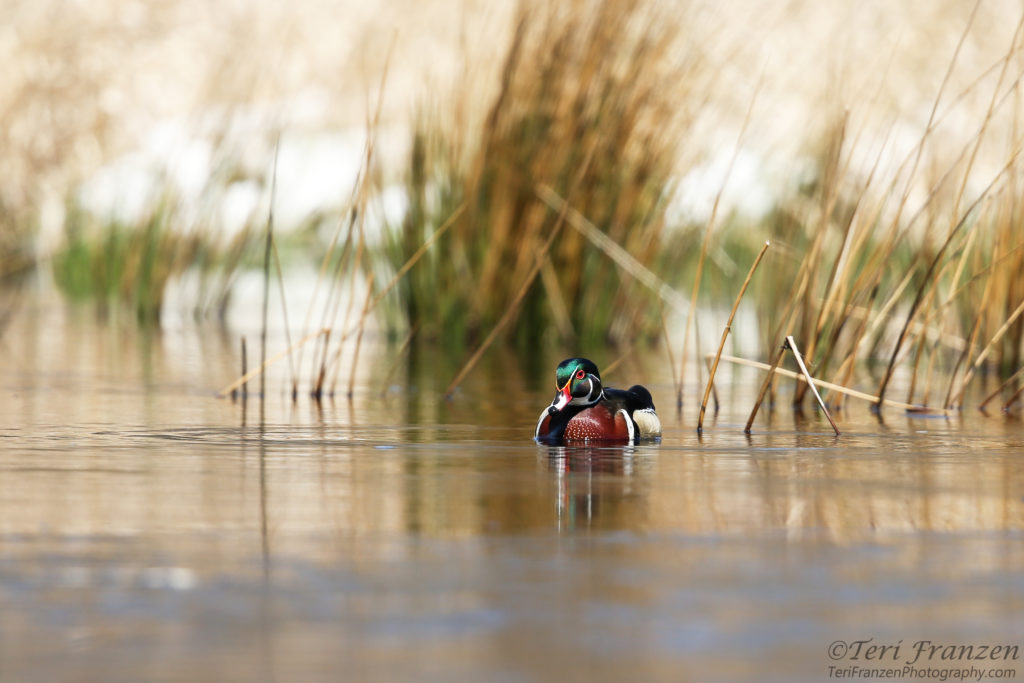 Drake one bitterly cold day in 2016. The ice had thawed an open channel of water. The ice shelf is just in front of the Wood Duck. 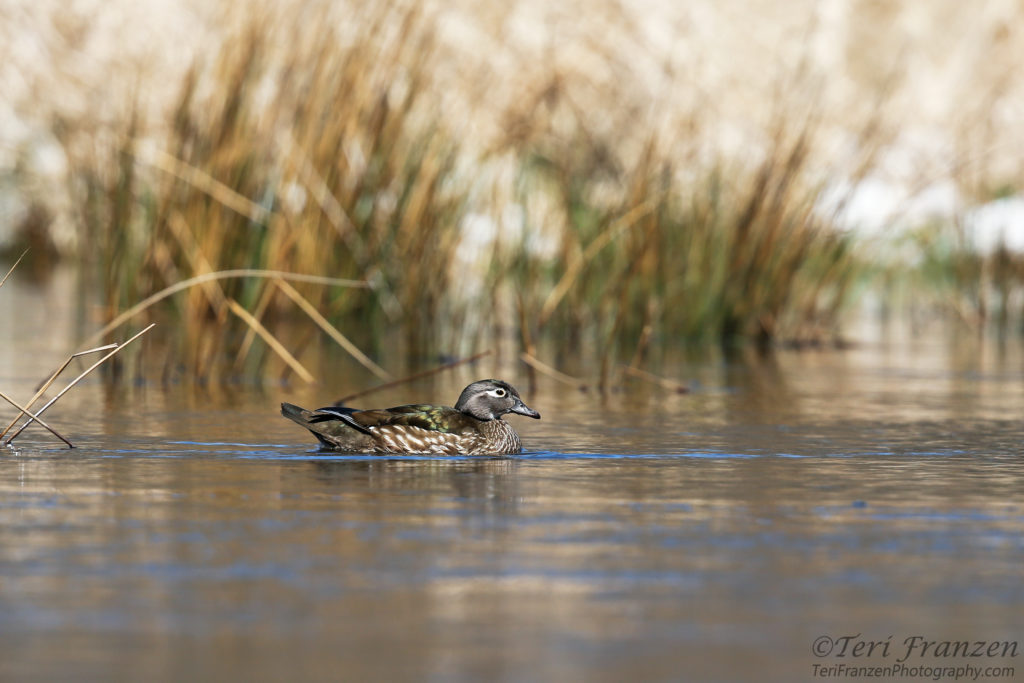 Hen Wood Duck that same bitterly cold day in April 2016. The ice shelf is blurred in the foreground and not distinguishable.

Winter of 2017 was an aberration.  One lone drake Wood Duck decided to winter on Cayuga Lake.  Based on e-bird reports it had often been seen in the channel at Taughannock Falls State Park which is just north of Ithaca, NY. In March we had a cold snap freezing smaller bodies of water.  That was followed by winter storm Stella which wreaked havoc, dumping two or more feet of snow in the area. I decided to drive up to Cayuga Lake and seek out my shot. After I arrived I spotted the Wood Duck right away swimming and dabbling among the Mallards. I watched him for several minutes and then it happened! He climbed onto the snow-covered ice.

At first, my angle from the sun was terrible, he was far across the channel and there were Mallards cluttering the image. After a couple of insurance shots I decided to risk moving to a better spot. 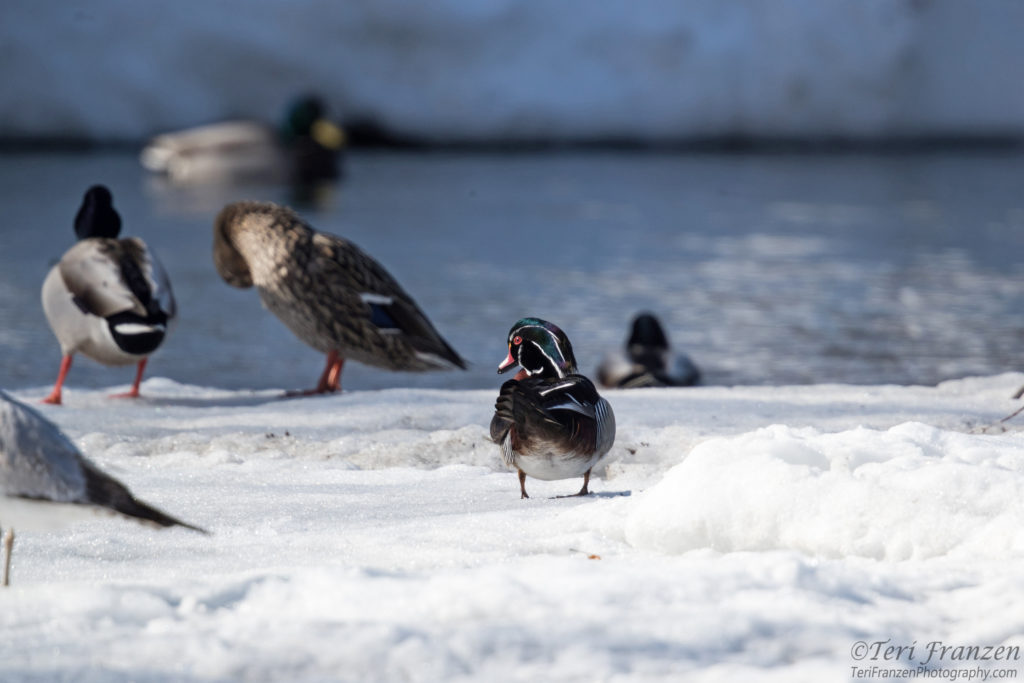 Insurance Shot. The Wood Duck was far away, in a bad position, at a poor angle from the sun and there were distractions all around.

I hauled my gear back to my jeep and drove out of the park, across the bridge and to the other side of the channel. Magically, my luck held out and the Woody was still in that spot. After I arrived, the drake stayed on the ice for about five minutes longer, giving me a chance to grab the long anticipated shot. I waited for two more hours to see if he would return to the ice but he never did. But thanks to Stella and one hardy Wood Duck, I did get the shot. 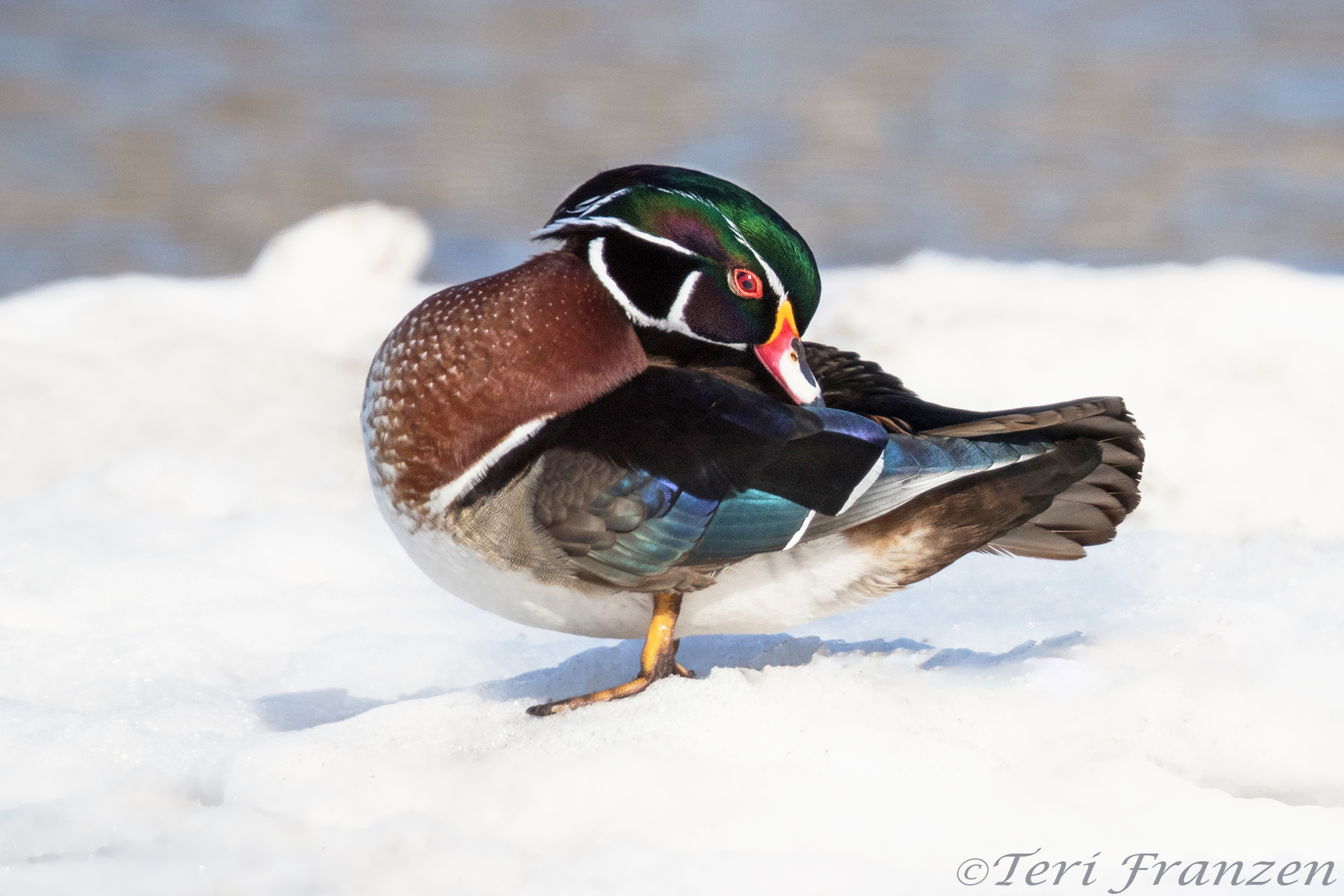 Wood Duck preening on a snowy ice shelf. Photographed with a 1DX II, 500mm f/4 IS II lens and 2.0x III teleconverter and propped on my knee. 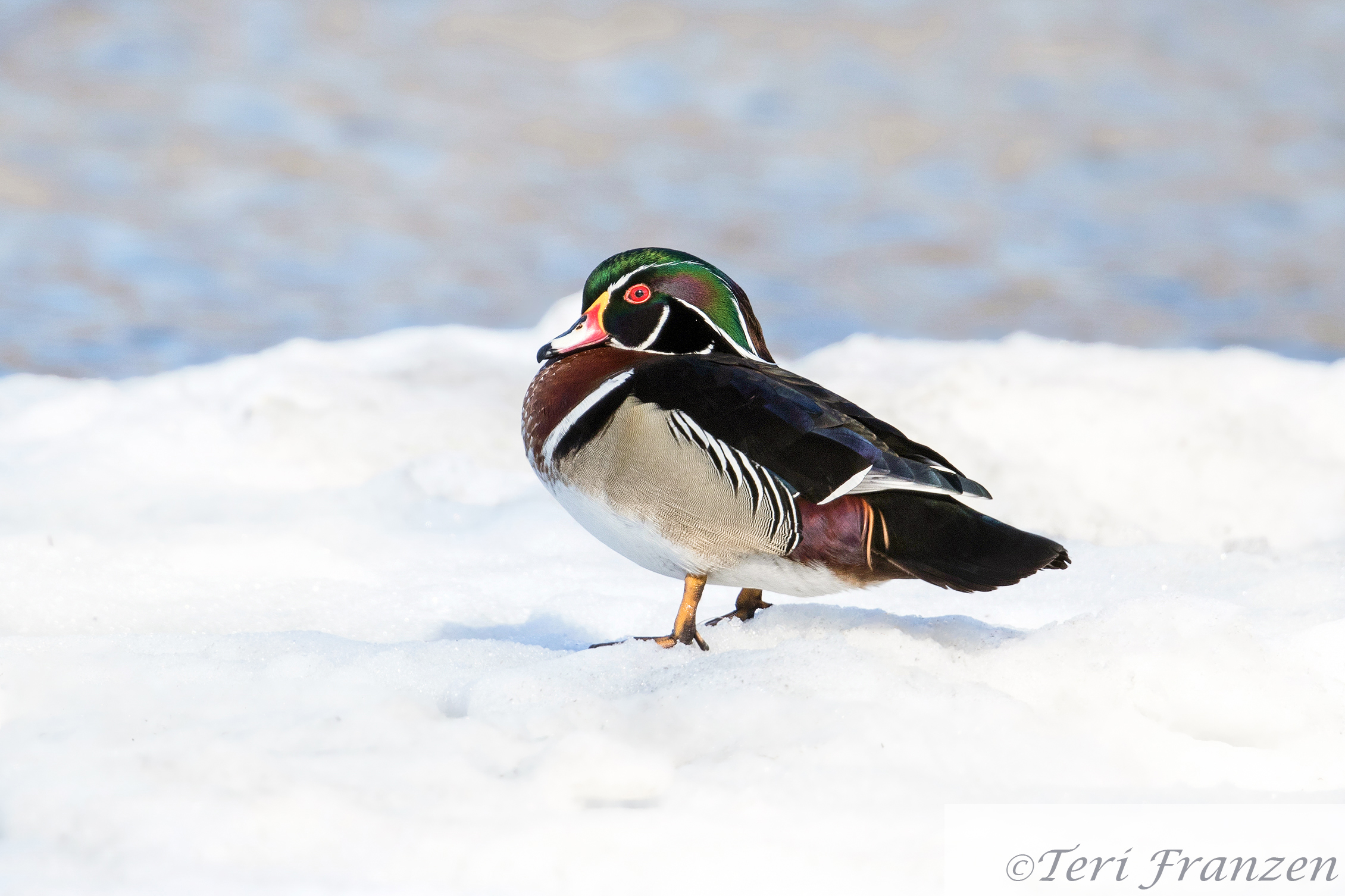 Wood Duck perched on a snowy ice shelf. Photographed with a 1DX II, 500mm f/4 IS II lens and 1.4x III teleconverter and propped on my knee. 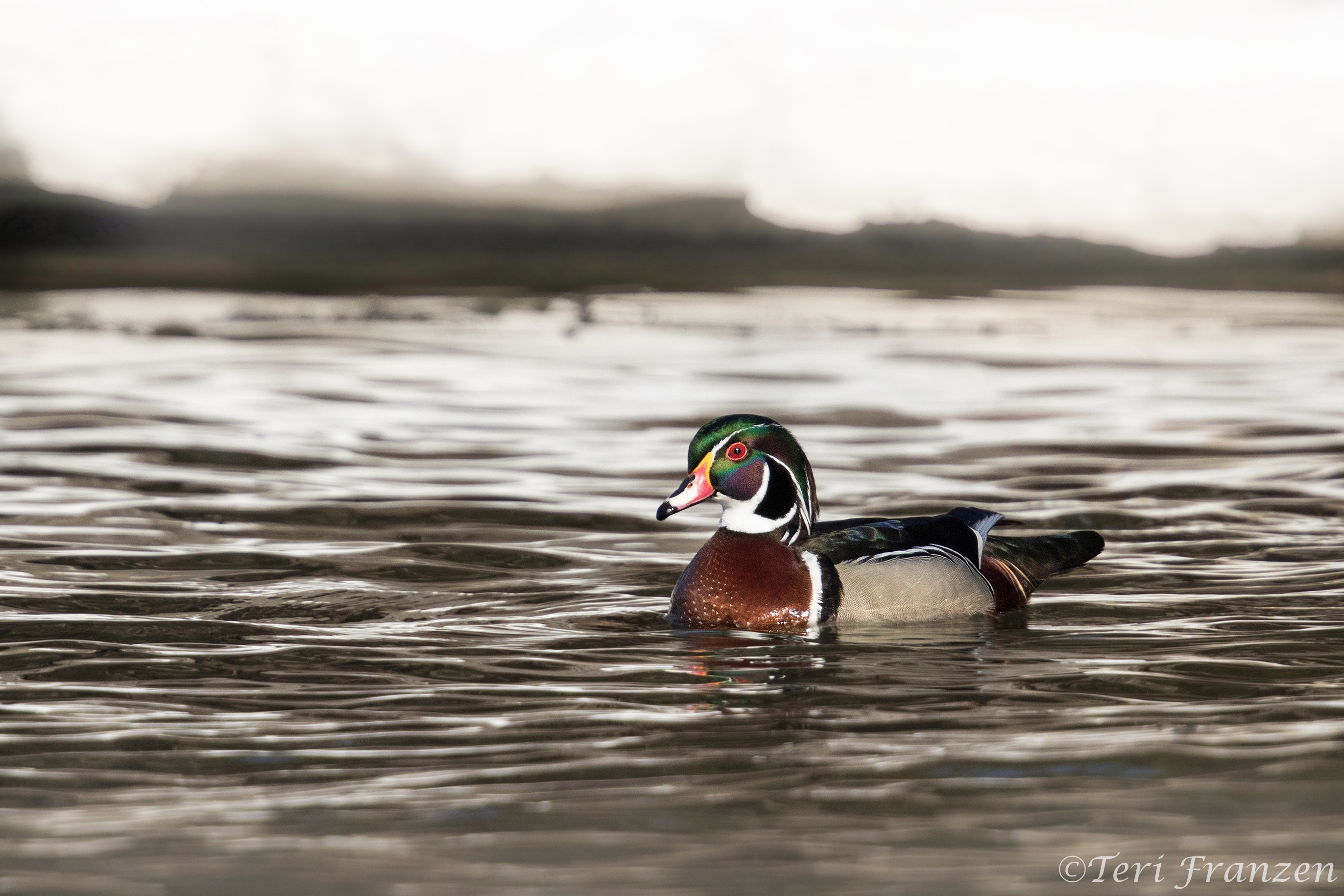 The snowy backdrop reflected white onto the water.

Next long awaited dream shot on my list, a perfect Wood Duck wing flap in golden light.  That one continues to elude me but spring is here and the Woodies will be back soon on my favorite pond.  Stay tuned!

2 thoughts on “Woody on Ice”